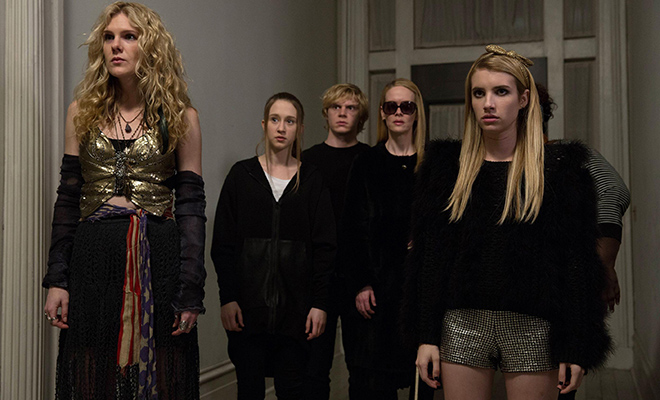 Well, that was surprising! The title of this episode should have been “Holy Shit!”

The second-to-last episode of American Horror Story: Coven‘s third season aired on Wednesday night, and it certainly made us gasp while answering some of our most burning questions from last week.

After wondering for what feels like an eternity what on God’s green earth the seven wonders are, we finally have some answers.

As Fiona (Jessica Lange) tells Queenie (Gabourey Sidibe), “escaping the seven wonders can get you killed but perform them and you are the next supreme.”

But Queenie is having none of this. She knows that Fiona is just trying to find out who can in fact perform the seven wonders, so that she can kill them, thus preserving her status as the Supreme.

Fiona attempts to convince Queenie that she’s wrong, but fails. Our favorite human voodoo doll then inquires as to Marie Laveau’s (Angela Bassett) whereabouts because when “the only other black witch in this place goes missing, I want to know what happened.” The conversation ends with Fiona using her powers to nearly choke Queenie to death while demanding that she respect her. After all, she is still the Supreme. She also tells Queenie that she is to perform the seven wonders or die trying.

After stabbing her own eyes out, Delia (Sarah Paulson) is now desperately trying to regain the powers she had after she first lost her sight in an acid attack.

She tells Madison (Emma Roberts) that even though she’s picked up some of Misty’s possessions, she can’t figure out what has happened to her. Of course, we know that the rehab-hopping starlet used her powers to lock the Stevie Nicks lover away in an entombed coffin.

Delia insists on touching Madison to try and gain some insight into Misty’s (Lily Rabe’s) whereabouts, and of course Madison shifts around the room each time the blind witch tries to come close to her.

Delia knows something is up. “What are you afraid I might see?,” she asks Madison. Meanwhile, Queenie inadvertently goes to hell in search of Marie (who she finds out was brutally murdered by MDL), which brings her back to when she managed a fast food joint.

It’s there that she has a vision of Papa Legba. He mostly mumbles, but what we gathered is that he’s threatening Queenie by showing her what her own personal hell looks like.

Cut to Madame LaLaurie (Kathy Bates), who has adopted a disguise and is giving tours of her infamous home, which is known for once containing a torture chamber. Of course MDL’s version of the tour makes her out to be more saintly rather than the serial killer she is known as. She describes herself as a “visionary” who was “misunderstood.”

Really? So keeping people  locked away in cages and mutilating them simply means one is ahead of their time? OK.

MDL attacks (and tastes the blood of) the former tour guide, and keeps her knocked out body in the very attic where she once killed hundreds. By last week, it was clear that we had enough of MDL. We get it, she’s racist. Can we move on from her now?

Thankfully, Queenie stabs her. All rejoice. Since it’s almost the end of the season, perhaps it’s safe to conclude that now when someone dies, we won’t be seeing them again, unlike every other time someone has died on this show.

As death grows closer for Fiona, she becomes emotional (though we never know if it’s authentic or not) and gives over her family heirloom to Delia.

Suddenly, her second sight is restored, providing her with a very CREEPY vision of the entire coven (including herself) meeting their gruesome end at the hands of Fiona.

Delia visits the Axeman (Danny Huston) and tells him that “it’s not safe” to love her mother because “she’s going to kill all of us and leave you behind too.” She’s able to prove this to him using her new fangled vision powers.

She’s also able to figure out the details of where Misty is. Rejoice times two! With Queenie’s help, they fish her out of the tomb and revive her unconscious body.

Myrtle (Frances Conroy) informs Madison of Misty’s rescue and implies that she may have had something to do with Misty’s initial disappearance, which of course she doesn’t own up to.

That’s when Zoe (Taissa Farmiga) — we were wondering where she was! — and Kyle (Evan Peters) return. I’m not even sure if the title Franken Kyle applies anymore because he seems to be a fully functioning human at this point.

Anyway, Zoe explains that the two did try to escape from the coven and cast away their darkness but (as we see in a flashback) they were caressing one another’s faces and minding their own business when a homeless guy was incredibly rude to Zoe.

Of course Franken Kyle (yup, he’s back to Franken Kyle) snapped his neck. I believe I read in Cosmo that when a guy murders a person for not being polite to you, even if said person sleeps under a tree and sometimes grunts like a caveman, he’s into you.

Zoe then says that she had to come back because “there’s no escaping what I am.”

Cut to: her reviving the homeless guy. “I came back because clearly I’m the next supreme,” she says. Oy!

Suddenly, Misty appears from beyond the grave (literally, she’s just come from her grave) and confronts Madison in a glorious showdown that included a lot of ass-kicking at the hands (and feet) of Misty.

But nothing unites a feuding group like a common enemy and that’s what happens when the Axeman shows up.

“Wow, did you walk into the wrong house!” Madison yells, seconds after getting the ass-kicking of a lifetime. The gals are of course able to defend themselves against him but stop dead in their tracks when Delia reveals that he’s covered in her mother’s blood.

In a flashback we see the ever sensitive Axeman confront Fiona about her plans to ditch him in a few days. She doesn’t bother to deny that she’s abandoning him. She’s looking forward to having 30 years of vitality after she kills the supreme.

This doesn’t go over well with him. We know this because he brutally murders her with his signature Axe and then feeds her to the alligators so that she can’t be revived.

The remaining women of the coven then stab him to death in the most brutal scene ever witnessed on network television, I’m sure.

I mean, is there a such thing as over stabbing? Because they definitely over stab this man.

Since MDL and Marie failed to hold up their end of the bargain with Papa Legba, they have been sent to their own versions of hell.

And guess what that means? MDL is forced to spend eternity in her torture attic next to the daughter she once destroyed (Borquita) as Marie forces a hot poker down her throat. This is definitely worse than working at a crowded fast food place.

• The scene between Delia and the Axeman was not only sharply written, it was an unexpected yet welcomed plot turn.

• Loved Queenie responding to Madison and Misty’s brutal fight by saying, “This is awesome.”

• The confrontation between Fiona and the Axeman was freaking chilling. Wow! It’s a testament to Lange’s performance that we’re still rooting for her to triumph in the end.

• Delia’s willingness to punch out her own eye balls is far-fetched, even for a show about the supernatural. It makes little sense that she would inflict such cringeworthy harm on herself for a coven that (let’s face it), is a hot mess of epic proportions. Furthermore, it was disturbing enough to see her eyes practically burn out of her head midway through the season, we don’t need to see that happen all over again.

• For the last few episodes we’ve been left wondering why the girls haven’t been using their powers. Finally, with one (yes one!) episode left, the gals have utilized some of their other worldly skills.

Madison to Axeman: “Wow did you walk into the wrong house.”

Misty: “Well that’s it then. Even I can’t bring somebody back once they’re gator shit.”

Misty: “We really don’t need a man to protect us.”

1. We didn’t actually see Fiona’s body being eaten by the alligators (which is weird, because they show EVERYTHING else), so it’s possible that we haven’t seen the last of her.

2. Where is Spalding and the baby he stole? On second thought, I don’t want to know.

3. There’s no way Madison is going to get away with what she did to Misty, right?

What Lies (or Rises) Ahead

As Delia said, “By next week, we will have a new supreme.” Yet if Fiona isn’t really dead, we won’t have a new one. We’ll just have the old one … turn into the new one.

Knowing the Axeman, it’s possible that he’s covering for Fiona. Which could mean that he let himself get stabbed for her just to throw everyone off. I think I saw something on that same Cosmo list that pointed out, when a guy gets stab by a horde of women to protect you, he’s VERY into you.

Fiona returning would be epic though. I’m rooting for Fi to come back from the dead and win out over everyone.

The season finale of “American Horror Story: Coven” airs next Wednesday on January 29th at 10 p.m. ET on FX!