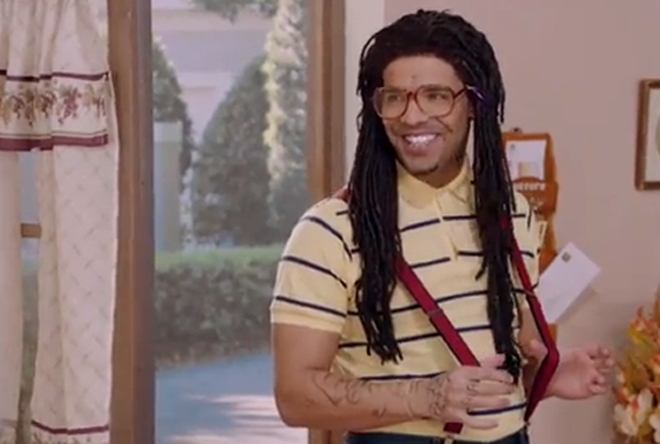 There are a few pop stars who’ve been fortunate and blessed enough to have the honor of both hosting and performing on the iconic, late-night phenomenon otherwise known as “Saturday Night Live,” and Drake manages to add his name to this short list of SNL Superstars.

In the cold open, Drake nails Alex Rodriguez aka A-Rod’s nasty habit of licking his lips and making inappropriate facial gestures. And you thought LL Cool J had a problem licking his lips? Give Drizzy’s A-Rod a spin.

Drake knows that there are certain things about him that will always get people talking. Like his mixed-race origins. In the monologue, Drake takes the issue head on with both a remarkable authenticity and a sharp sense of comedic timing as he relives his Bar Mitzvah, which sees the black and Jewish sides of his family come together for the first time.

After running through a rap-fused remix of the Hebrew classic “Hava Nagila,” Drake sets his sights on his YMCMB family as he played Lil’ Wayne playing Steve Urkel in a hilarious send-up of ’90s sitcoms with hip-hop stars recast in the lead roles.

Proving that he’s extremely adept at imitations, Drake next takes on the troubled but well-known black comedian Katt Williams. In a skit that skewers Nancy Grace, Drake plays Katt during a Nancy Grace report on the legalization of marijuana in Colorado. Katt, as we all know, is an ATLien but with weed flowing in the streets like fresh water, it’s no surprise Katt has decided to become “Rocky Mountain High,” as Drake says in the skit.

For the SNL Digital Short, Drake and his co-stars tackle the aspirational but often futile practice of setting New Year’s Resolutions. Usually it has to do with making changes in diet or exercise, but more often than not, donuts win the day, despite our best efforts.

While Drake is no stranger to being a ladies man, in his skit as a dad that’s too-hot-too-handle, he transforms into a DILF. Well, at least that’s what one of the guests in his daughter’s slumber party is convinced of.

Disney World is the happiest place on Earth, right? Then why does theme park guest Rahat seem so…oblivious? In this sketch, Drake plays a Disney employee who tries to make the best of a very awkward situation with a theme park guest who just won’t play along.

Detention is the last place most students want to end up but Drake plays a bad boy student who knows how to make a visiting poetry teacher feel right at home in the Bad Kids Hangout.

Last but not least, Drake gives the news anchor chair a spin in this amusing send-up of life as a morning show host.

Oh and did we mention that he also found time to perform a few songs too?

Yeah, if you didn’t know before, Drake just confirmed it: He’s officially hip-hop’s triple threat. Rapping, singing and acting. Who else can do it like he can? Have a seat, haters.