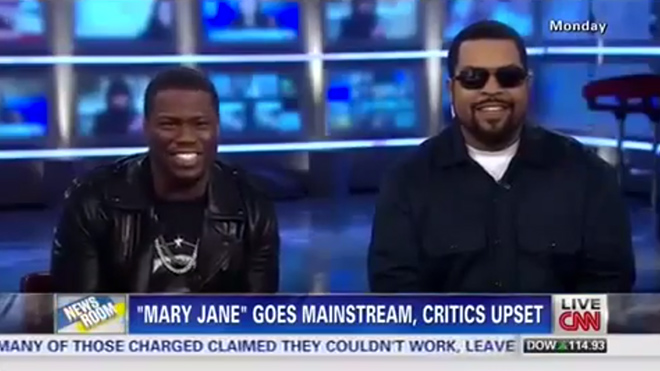 Everyone knows Nancy Grace was born with a stick up her butt, and that’s why she hates everything and everyone, except Nancy Grace, of course.

Last Monday (Jan 6), the HLN host, who takes great pleasure in yelling at other human beings and telling them how they’re “WRONG! WRONG! WRONG!” attacked people who use marijuana recreationally, calling them “fat and lazy” and adding that she wouldn’t want, for example, her babysitter to be “high off pot” while performing their duties.

Her comments were in response to the State of Colorado’s newly instated recreational weed law, which makes it legal for any person in the state (whether they live there or are just visiting) over the age of the 21 to possess marijuana.

On Tuesday (Jan 14), CNN anchor Brooke Baldwin sat down with actor/comedian Kevin Hart and actor/rapper Ice Cube — who were both there to promote their new film “Ride Along” — and asked them what they thought about Nancy Grace’s absurd comments against those who use marijuana recreationally.

Hart and Cube then proceeded to mock Grace and her views on weed:

“She just called my grandpops lazy,” Hart exclaimed after watching a clip of Grace’s comments. “My grandpop got glaucoma.”

“So, I take it we’re disagreeing with Nancy?” Baldwin asked.

Hart proceeded to note that the legalization of marijuana in Colorado does not impact his life and he is unconcerned others using or abstaining from marijuana use.

WATCH THE CLIP ABOVE