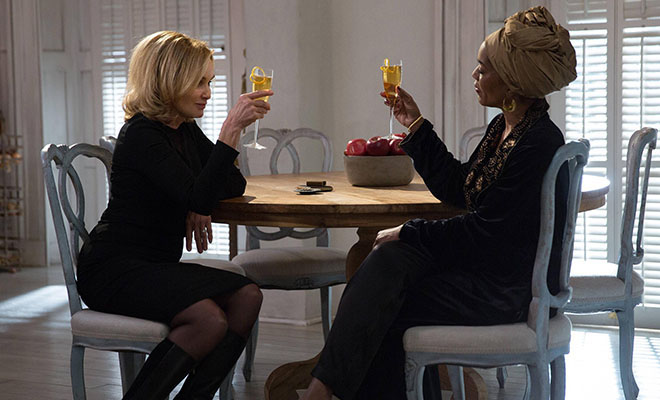 With no shortage of jaw-dropping and wince-inducing moments, the plot has gone in some gory places that we didn’t see coming.

Last week marked the show’s return following it’s mid-season hiatus and a number of story lines that we were aching to know more about were neglected. Thankfully, episode 11 answered some of our burning questions.

Somehow, she has managed to put her once detached head back on, seamlessly.

Before you know it, she’s serving the women of the coven as a….well…slave. She also acts as a nanny for the infant Marie stole.

But just when you thought that maybe MDL was shedding her murderous racist persona, she ties up and tortures an injured gardener.

Sadly, even though the entire house is filled with women who have super powers, none of them realize the immortal bigot has vanished with their black gardener.

She takes him to Spalding’s (Dennis O’Hare) old room and begins to mutilate him. I must confess, I had a throw pillow in front of my face for much of this… so I can’t say much more. But, let’s just saw it was pretty AWFUL.

Spalding appears to MDL in ghost-form and tells her that he admires her “art” (yikes!). He informs her that if she longs for release, he can help her achieve it.

The slave torturer says that she regrets drinking the potion that made her immortal.

The ever so wise Spalding tells her that in exchange for a doll from 1895 (remember how much he loves having tea parties with dolls?), he’ll give her pills that will make Marie (Angela Bassett) mortal, so that she can kill her.

Once he gets the doll, Spalding, gives MDL Benadryl (LMFAO!!!), which she puts into Marie’s drink — seriously under the impression that this will somehow immortalize her — and stabs her right in the heart.

She obviously has no clue that the pills are just for allergies until she discovers that Marie has not died. She literally pulls the knife out of her chest and comes for MDL.

Spalding steps in and hits Marie over the head. We then realize Spalding’s plan the whole time was to knock Marie out, so he could take her stolen baby. This is unsettling on so many levels.

Zoe (Taissa Farminga) is able to use her powers to see portions of what really happened to Nan and she begins to realize that she may not have fallen in the tub, like Fiona claims. Madison (Emma Roberts) isn’t too happy that her former Franken lover Kyle (Evan Peters) is now seriously involved with Zoe, who he proclaimed his love for two episodes back. We know this because she uses her powers to hit Zoe in the head with a light (this was how she killed a film director once).

The Axeman (Danny Houston), or “Saxman,” we could say, continues wooing his beloved Fiona (Jessica Lange) as she seductively toys with her stockings and lounges on the bed.

He shares his plans for the two of them to run off together and is still hell bent on distorting the next supreme and this makes Fi VERY happy.

Delia (Sarah Paulson) attempts to bury the hatchet with Queenie, who says that surviving Hank’s attack has made her think she may be the next supreme.

She did, after all, survive being shot with a silver bullet, which is supposed to be deadly to any witch, except her, I guess.

Delia’s apology doesn’t go over too well though, since our favorite human voodoo doll isn’t ready to forgive her just yet.

This was a rather head-scratching moment. It was Queenie who betrayed the Coven. So why is she being so harsh with Delia, who has been kind and welcoming?

To say that Delia doesn’t take this well is an understatement because she ends up (literally) poking her eyes out. Did anyone else clutch their face in shock?

Fiona is obviously horrified by this and Myrtle’s (Francis O’Conor) explanation that she took out her eyes for the sake of the coven does little to quell this.

Delia has done this to re-gain her second sight, which allows her to peer into the soul of those she touches and see their deepest, darkest thoughts, just like before.

Myrtle and Zoe have a heart-to-heart about her love for Kyle, which Myrtle says was apparent at Nan’s funeral (must have missed that). She gives Zoe bus tickets to Epcot, so that she and Kyle can flee. Kyle tells Zoe that he can’t leave with her because he’s afraid of the darkness that’s inside of him. A tearful Zoe informs him that she isn’t afraid of him and she’s pretty convincing because he ends up gleefully boarding a bus with her.

Meanwhile, Hank’s witch-hunting father Delphi comes up with what he (for some stupid reason) thinks is a good plan to enact revenge on the witches. He wants to meet with them and murder them after he earns their trust. Guess years of hunting witches has taught him NOTHING.

He and his staff meet with Fiona and Marie. Then a box of awesome is opened … !!!

The Axeman appears and really lives up to his name as he massacres the entire board room. All the while, Fiona is sipping on a drink and Marie is texting.

I say, more glorious moments like this and less of those gruesome, sickening torture scenes please!

• Fiona continues to be an enthralling character, largely because you have no clue what she’s going to say or do next.

• Once again there was some truly effective acting from Sarah Paulson. She’s become the show’s resident scene-stealer.

• Overall, the dialogue in this episode was super sharp. So many quotables! • I don’t know about anyone else, but I immediately want to look away whenever there’s a flashback having to do with MDL. Those scenes are usually more disturbing than anything that’s been on the show before (and yes, I’ve seen “Asylum”). The level of stomach-churrning brutality is just too much to bear at times. For this reason, the episode could have definitely done without MDL’s horrifying attic scenes. Furthermore, it seems utterly tasteless to portray this type of violence in a comedic manner. MDL is awful. We get it. ENOUGH.

• It’s still not clear why Zoe was introduced as the main character. We initially saw the story through her eyes, yet now she’s barely factoring into the storyline.

• The fact that no one actually dies dies on the show lowers the stakes quite a bit. Nan’s death for instance is far less heartbreaking than it should have been because NO ONE else has stayed dead.

Madison to Myrtle: “You’re a dried up old hot pocket.”

Madison: “Crotchless panties for everyone.”

Madison to Kyle: “As for you, Ken doll. Putting you together was fun but taking you apart’s gonna be even more fun.”

Myrtle on Madison: “She’d slit your throat, then sleep like a baby.”

Myrtle: “In the fall, the rotting leaves smell like an Olympian’s ejaculate!”

1. Why did Queenie put MDL’s head back on? She had so much more control over her before, when she was a body-less head.

2. For the love of God, why on earth did anyone let MDL tend to the wounded gardener?

3. When will we get to see crazy ol’ Misty (Lilly Rabe) again?

4. We know that Zoe and Kyle will be back, but will they at least get to enjoy some happiness first? Call me romantic but I’ve been rooting for these too, ever since she didn’t let him put a gun in his mouth.

5. Now that two people (Zoe and Delia) may find out what Fiona and Marie are really up to, what is to become of these ladies?

Two more episodes left guys. Expect No. 12 to be even more intense than the ones before!