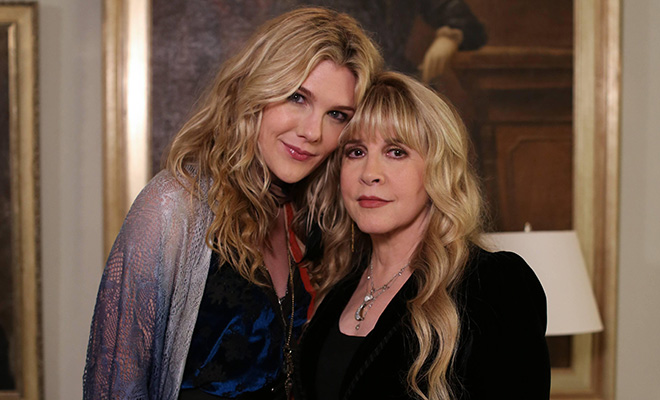 Following a nearly month-long winter hiatus that seemed like forever, “American Horror Story: Coven” was back in full force on Wednesday night (Jan 8), and as usual, the hit FX chiller delivered on unexpected plot twists and powerhouse performances.

Marie (Angela Bassett) admits that she’s ashamed to show weakness but after the attack on her salon at the hands of Hank the Witch Hunter, she has no choice but to join forces with her onetime enemy, Fiona (Jessica Lange).

The two have an unexpected heart to heart, in which Marie claims that she’s been alone for so long and that she’s found companionship in an enemy and is seeking a lasting truce.

When Fiona leaves, Marie is awakened by an evil dreadheaded spirit guy with a strange fondness to cocaine, who tells that “her master calls.”

Marie enters a hospital in the middle of the night and is able to hypnotize her way into the emergency room where she steals a baby. When the cops stop her, she uses some crazy mind-trick to get the cops to shoot each other in the heads. She then tells the wailing baby “Shut up, I’ll give you something to cry about!”

Marie visits the Academy and reveals all about Hank the Witch Hunter to Fiona and Delia (Sarah Paulson). Fiona reacts to this by slapping the sh*t out of Delia, saying that she married Hank as an act of rebellion and in the process brought a witch-hunter into their midst.

Misty (Lilly Rabe) tells Fiona that even if she kills her (like she did Madison), she already has a plan to bring herself back. Suddenly, the “white witch” Stevie Nicks appears and begins playing “Rhiannon” on piano out of nowhere.

Of course Misty, being the huge Stevie Nicks fan that she is, passes out at the mere site of the woman. “You owe me five bucks,” said Fiona. The “Dreams” singer gives Misty one of her shawls and wishes her luck with the seven wonders.

Fiona informs Madison that she’s not the new supreme and implies that Misty is. She also says that in due time, the powerful Misty will eventually perform the seven wonders.

Nan (Jamie Brewer) claims that she could be the next supreme but Madison doubts this, claiming that she‘s still in the running for the spot because she no longer suffers from a heart murmur. (Because she no longer has no heart, after that whole “dying and coming back” thing)

Delia begins researching the organization that Hank belonged to, in an effort to be “helpful.” The still enraged Fiona shouts at Delia “NOOOOOOOO! You can’t help me! You can’t help ANYONE!” Fiona also told her only daughter that she is “worthless and hopeless” and to “get out of her sight.”

Marie confides in Fiona, telling her that back when she thought she was “the shit” she made a deal with the voodoo spirit Papa Legba (Lance Reddick) aka the “dreadhead spirit guy who likes cocaine.”

She sold him her soul for eternal life, and once a year she gave him what he wanted. This proved to be a bad idea, when he ended up taking her newborn baby. We’re going to jump the gun and assume that this has something to do with the baby she stole from the hospital.

She also reveals that if someone wants to see him bad enough, he will come to them. Given the look on Fiona’s face and the fact that her days are numbered, it’s pretty clear what she’s planning.

At a funeral procession, the ever manipulative Madison (Emma Roberts) attempts to make Misty believe that she isn’t the next supreme and that Stevie was lying to her (she would never!) but Misty isn’t buying what she’s selling.

In a particularly spectacular moment, Madison raises the deceased man from the dead, WITHOUT EVEN TOUCHING HIM.

He casually pops right out of the coffin and everything, and Madison convinces Misty to toss Stevie’s shawl into the now unoccupied coffin because “[Stevie] probably has a ton more like it in “the bargain bin in her basement” that she gives out to people randomly to “make them feel special.”

For some reason, Misty falls for this and listens before she is hit on the head with a brick, knocked unconscious, and thrown into the coffin, which Madison closes and has two funeral hands carry the coffin away to have Misty buried alive in a mausoleum.

Nan and Zoe (Taissa Farmiga) want to pay their respects to Luke (Alexander Dreymon) and possibly resurrect him.

They visit his mother Joan in order to try and figure out where his body is, only to learn that she had him cremated. This obviously doesn’t sit well with Nan (or us, because that boy looked damn good with his shirt off!).

Nan reacts by calling her a “bitch” and force-feeding her a bottle of bleach, using some crazy mind-control power we didn’t even know she had. DAMN NAN!

Delia is distraught over the damage she has brought upon the coven. Myrtle attempts to alley her despair but fails miserably.

Fiona summons Legba (with cocaine, of course), telling him that she doesn’t want to die. She offers up her soul in exchange for not aging or facing death. He agrees on the condition that one day a year she does what he demands. The deal comes to a halt when Legba informs her that she “has no soul.”

Suddenly, the ever devoted Axeman appears and encourages her to take down her young predecessor. But there’s just one issue with that. She has no idea who the hell that is. So what’s her solution to this dilemma? Why, to “kill them all” of course. We just got the chills.

Back at the academy, Zoe tells Nan that based on the way she was able to kill Joan, she could very well be the next supreme.

When Nan hears Marie’s stolen baby crying, she picks it up and threatens to kill Marie, informing her that she was able to kill “that neighbor lady” and is therefore the new supreme (LOLz).

Fiona arrives on the scene just in time to suggest that they both drown Nan in the tub. Surprisingly, she is recused by Legba.

Stevie returns and plays “Has Anyone Ever Written Anything for You” as Fiona winds down from the intense day.

Fiona, while drowning Nan: “Don’t put up such a fuss. You’re not the first witch to be drowned.”

Fiona on Nan’s innocence: “She’s innocent! Mostly… She killed a neighbor but that bitch had it coming.”

Papa Leba to Fiona after she conjured him with cocaine: “You brunga da gud stuff!”

Nan to Joan while mind-controlling her into drink an entire bottle of bleach: “You have to be cleansed!”

Nan to Papa Legba after she died: “Do I have to wear this outfit for all eternity?”

Papa Legba to Fiona and Marie after drowning Nan in the bathtub: “U 2 togedda be trouble!”

Auntie Myrtle to Delia when asked what the hell that strange sound was: “Don’t be a hater, dear!”

1. Where was our beloved Franken-cutie, Kyle this week? We were eager to see how Fiona was going to use him to her advantage. It’s so easy to picture Fi, walking him on a leash like the “guard dog” he is.

2. Is Queenie really gone for good? Because we are so not down with that. Same applies to Luke. It wouldn’t be that surprising if Joan was completely bullshitting Nan about her son being cremated.

3. But the main thing we’re pondering … is what is to become of Delphine?! We know that the “eternal racist” has had her head removed but she was just starting to come around on the whole white supremacist thing. It’ll be interesting to see how the now joined witches will use her, if at all.

We’ve only got a few weeks left until the season concludes and there’s so much to wrap up!

See you guys next week!