GOSSIPONTHIS.COM Celebs Rihanna Brings in the New Year with Friends at Her Multi-Million Dollar... 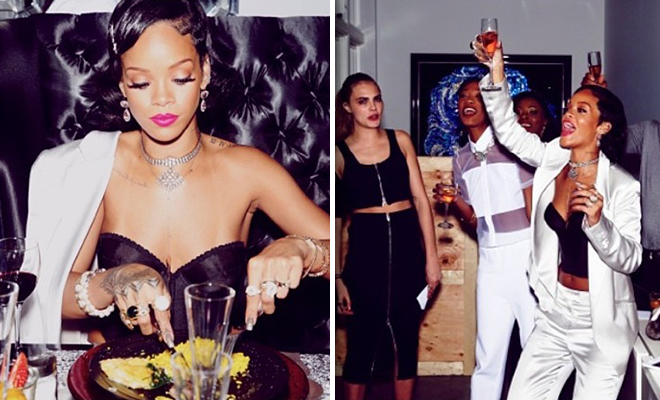 Rihanna sure does know how to party!!!

Along with some of her closest friends — including her BFF Melissa Forde, model Cara Delevingne and her assistant Jennifer Rosales — Rihanna closed out 2013 and brought in 2014 with an epic New Year’s celebration.

The evening kicked off with an intimate dinner hosted at RiRi’s $14.6 million penthouse in New York City and it featured a multi-course meal put together by her personal chef.

The ladies toasted to 2014 and then headed to Jay Z’s 40/40 Club, where Rihanna hosted a New York’s Eve countdown, popping bottles and smoking in VIP with her peeps.

Of course she shared every single moment on Instagram to her more than 10 million followers, because that’s what she does, and she does it very well.

We’ll just let the 30 or so pics (we lost count, seriously) speak for themselves:

Looks like Rihanna had the best New Years Eve/Day ever! How was yours?