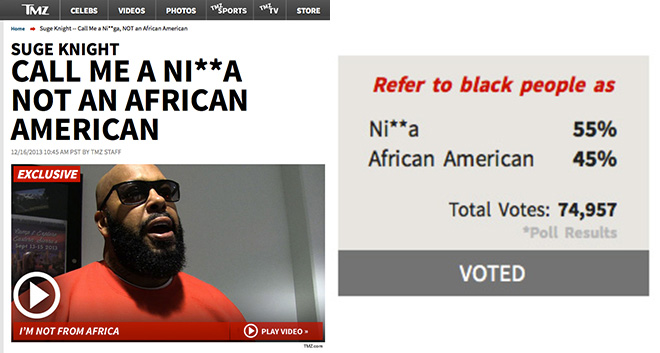 Wow. People who go to TMZ are racist as shit!

Not EVERYONE, of course, but according to a new foolhardy poll on the notorious gossip site, over 50% of their active visitors are racist as shit.

Yesterday, TMZ reported on Suge Knight being offended by the term “African American” and how he prefers to be called the “N-Word” instead because he is not “African.”

Suge also said that he finds it ridiculous that only rappers can use the word “nigga,” pointing out that if some people can use it, then everyone should be able to.

While we could go into a diatribe against Suge about how wrong he is and how retarded he sounds, no one person on our staff here at GOT neither has the time, nor the energy. So we’ll just leave it at that.

But anyway, back to this TMZ poll.

After contributing to the downfall of an entire race of people by even entertaining Suge Knight and his idiocy, the celebrity news site did a poll asking should black people be referred to as “Nigga” or African American. Are you effin serious?!?

So now we know how you really feel! Not only is this poll tasteless and disrespectful, but who in the hell gave TMZ the right to do it.

You don’t see anyone doing a “should white people be referred to as Caucasians or Crackers” poll, do you?

And who really gives a flying fuck what Suge Knight thinks, does, or cares about anyway? The only time we’re happy to hear his name being mentioned is when he’s geting knocked the fuck out.