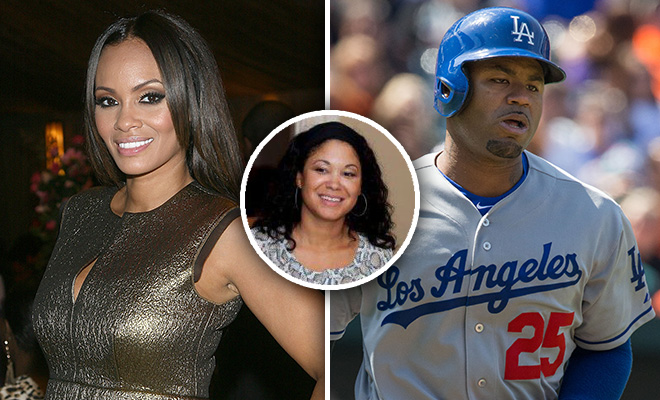 Evelyn Lozada shocked us all when she announced that she was having a baby, and when folks found out who the father was — MLB player Carl Crawford — they immediately got to digging, and discovered that Ev’s new baby daddy isn’t exactly “NEW” to this whole fatherhood thing.

Not only does Carl have a 10-year-old son from another relationship, but he also just had ANOTHER baby over the summer by a woman named Amy Freeman — the mother of his first child (see below). But what about those “sources” who told TMZ that she and Carl had been seeing each other for “almost a year” and their relationship had gotten “serious?” A relationship can’t be that “serious” if a guy has a baby with one woman around the same time he impregnates another.

Hold up, wait a minute. Let me put some pimpin’ in it … before you start getting messy with that information and have Evelyn looking at Carl like this: Bossip did their homework and confirmed that while Crawford did have a baby recently, he isn’t a cheater and Evelyn isn’t a home-wrecker.

Carl and Amy have not dated or lived together in over seven years, and this latest child was the result of an offhand, one-time incident where the pair were just being consenting adults having sex. Evelyn didn’t even come into the picture until much later.

I see … said the blind man who never saw.

The good news is that Evelyn Lozada is his new baby mama. The bad news? Well, there is none! There are a lot of guys out there — including this guy! **points at self** — who would love to have babies with a woman like Evelyn Lozada.