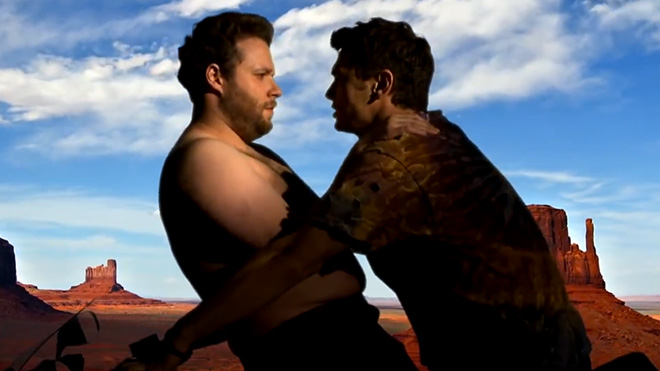 Kanye West debuted the video for his new single “Bound 2,” featuring his reality star girlfriend/baby mama Kim Kardashian, and it was so awful that we expected SOMEONE to eventually spoof it, but we definitely didn’t expect this.

James Franco and Seth Rogen were on the set of their new movie “The Interview” when they randomly got the idea (most likely out of pure boredom) to parody Kanye’s video, which features a topless Kim Kardashian and scenes of the two simulating sex on a motorcycle, all while in front of cheesy green screen backgrounds.

Franco and Rogen’s version, appropriately titled “Bound 3,” is basically the SAME. EXACT. THING. But with way more back hair and belly fat.

CHECK OUT THE VIDEO UP TOP! And as a bonus, here’s the side-by-side comparison of both videos, so you know it’s real: