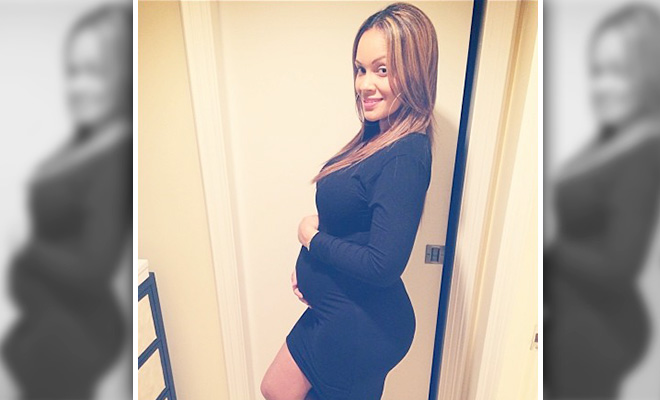 Is Evelyn Lozada 6 months pregnant by a baseball player? That’s the question the Internet is asking today after TMZ shared the following information this morning:

“Basketball Wives” star Evelyn Lozada has been keeping a big secret — she’s 6-months pregnant — and TMZ has learned Chad Johnson is NOT the baby daddy.

Sources close to Lozada tell us … she’s been seeing a guy for almost a year now and the relationship has gotten serious.

We’re told … the pregnancy was planned — it’s not a case of the whoops! And until now only a small number of relatives were privy to the news.

Evelyn — who famously divorced Chad “Ochocinco” Johnson over a year ago (in September 2012), after just two months of marriage following a violent domestic dispute — confirmed TMZ’s report with a photo showing off her baby bump on Instagram, which she captioned “NEW BEGINNINGS…”

And TMZ has more photos of Evelyn’s “enormous baby bump” on the beach with her 20-year-old daughter Shaniece yesterday in Hawaii.

But I know you’re still looking for the answer to that “who’s the baby daddy?” question and unfortunately we don’t have that for you just yet.

There are, however, rumors that Evelyn is dating an MLB baseball player named Carl Crawford, and according to Necole Bitchie, the two were spotted out together back in May at a Dodgers-Mets game in New York.

Her publicist denied those rumors, but Evelyn and Carl were spotted together again late last month, per some guy who tweeted to Lozada’s ex Chad Johnson that she had came to his place of work with Crawford.