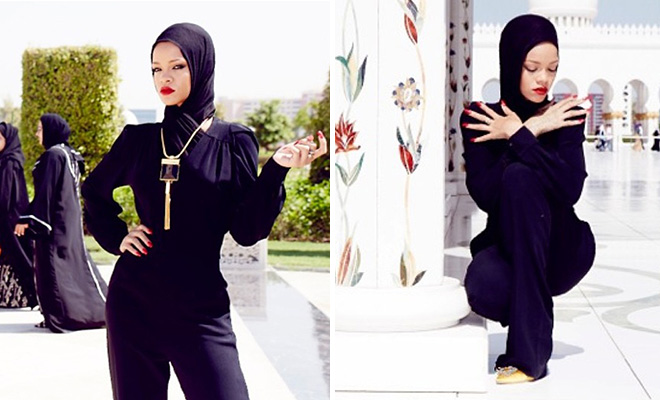 Sacrilegious behavior was all the rage this weekend.

First, there was Kanye West and his White Jesus on stage, and now, we have Rihanna, who pissed off Muslims all over the world after conducting a photo shoot outside of a mosque.

Yes, Rihanna was out in the United Arab Emirates and visited the Sheikh Zayed Grand Mosque Center in Abu Dhabi. However, she was asked to leave the landmark site after she posed for photos inappropriately on its grounds.

She was dressed accordingly: a dark outfit covering much of her body and a hijab. However, you don’t pose on your back outside of a mosque and caption it “no tan lines,” not to mention any all of the other seductive poses she shared via Instagram.

Now, I liked them on IG because they were cute shots. Nonetheless, girl, you gave them “infidel.”

The mosque confirmed her exit via statement: “She was asked to leave before entering the actual mosque after taking some photos that did not fit within the rules and regulations set out to preserve the sacredness of the center.”

Rihanna is getting in all kinds of trouble across the globe. I hope she doesn’t find herself arrested.

Check out the pictures from RiRi’s blasphemous impromptu Instagram photoshoot below: