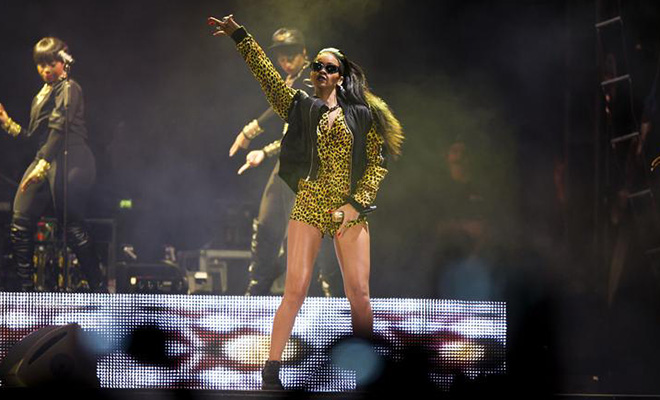 Rihanna is the youngest pop star to sell out Cape Town Stadium in South Africa, though it appears the show it self garnered mix reviews.

That’s not surprising to anyone who has seen Rihanna perform live. However, it’s not the lazy p-pop or half-sung vocals that bothered some fans. No, it’s the fact that she didn’t change clothes enough.

As in, they wanted the real deal with huge costume changes, lights, and more costume changes. Considering much of Rihanna’s career centers around the allure of what she’s wearing, it doesn’t sound like an unreasonable request though.

Fans left R&B star Rihanna’s Cape Town concert with mixed feelings last night. One fan, wearing leopard-print tights and a cap with the word “BAD” in red on it, was sobbing furiously while a friend led her from the Cape Town Stadium.

When asked what was the matter, Arlene Geduld (16), sobbed that: “She never came close enough!” The girls had paid R820 for Golden Circle tickets and said the singer never engaged with their side of the audience.

Rihanna and her 15 dancers performed on a stage with LED screens, occasionally venturing on to a catwalk around which the Golden Circle was gathered.

Winston Klaasen (22) said the show was “totes amazing” but questioned the singer’s wardrobe choice. “She was wearing the same outfit right through … no man! Surely she can afford more costumes!”

In other countries on her Diamonds World Tour, the 25-year-old singer slipped into spectacular costumes by the world’s foremost fashion designers, including Riccardo Tisci of luxury French label Givenchy.

It is unclear why she opted for a tiny leopard-print onesie and golden hoop earrings for the duration of her Cape Town show.

But thousands of fans were thrilled nevertheless and undeterred by talk of Rihanna’s lip-synching ways.

Rude. Rihanna doesn’t lip sync. She just might not bother singing much at all. Not the same!

And that Rihanna reign ain’t about to let up anyway. That one outfit she had on was cute.