GOSSIPONTHIS.COM Celebs “Love & Hip Hop” Feud: K.Michelle Is Not a Fan of Erica... 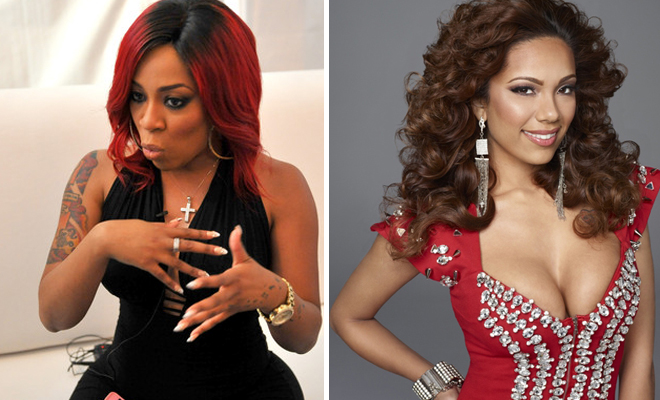 In a radio interview with Philly radio station 107.9, K. Michelle threw shade, darkness and a gaping black hole at Erica Mena when the radio hosts asked her for her thoughts on the aspiring singer and fiery Latina sexpot.

Radio Host: So that’s not gonna work, you guys are both alphas then?

K. Michelle: Look, I’ve never met her a day in my life. She went on her Twitter rant, I don’t know this girl. No one speaks about her in filming. I don’t film with any of the girls. You know I’m getting my own show so I’m on this show to introduce my show…I’m not into that drama, I’m not dealing with it. So even the producers at VH1 said this girl wants a storyline. And I told them to tame her, so they called her and tried to deal with it.

How does that Jay-Z song go? “Who gon’ run this town tonight?”

Sounds like K. Michelle calls the shots round here. She’s filming “LHHNY” on her terms and she’s still getting her own spinoff.

As if she didn’t shit on Erica Mena enough, K. Michelle went on to elaborate that she was “brought in to bring ratings” and boldly claimed that despite Erica’s antics, she still “didn’t do enough” to draw eyeballs to the show. Well, damn.

If Mouna can swing it so that K. Michelle actually attends the reunion show and sits next to Erica, that’ll make for must-see TV.

Check out K. Michelle’s interview below