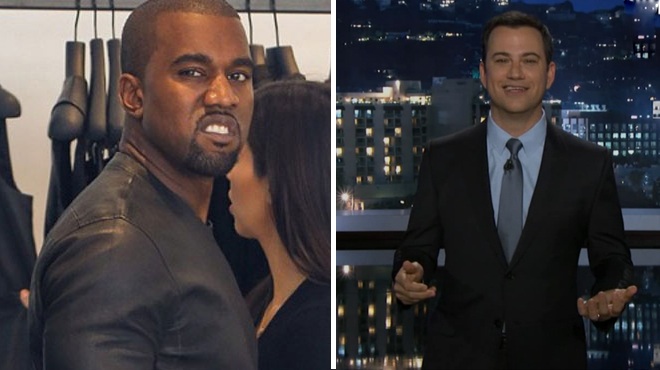 It’s been a minute, but Kanye West is back to ranting and raving on social media again.

After sitting for a cool, calm and collected interview with his babymama’s mother Kris Jenner, you might have thought Kanye was back on track with this whole media thing.

But you thought wrong. In a surprisingly thin-skinned reaction to an otherwise harmless skit that aired on “Jimmmy Kimmel Live”, Kanye made it clear that he will not tolerate being mocked.

Guess that “I Am a God” song from “Yeezus” is kind of serious.

But let’s walk you through the timeline of events so you can better understand the source of Kanye’s fury.

It all started with this BBC interview Kanye did that aired earlier this week.

In the interview, Kanye says some very ego-fueled statements like “We new the rockstars and I’m the biggest one out there.”

So it was ripe for parody. Jimmy Kimmel, being a comedian saw the humor in Ye’s interview so he commissioned a few kids to re-enact it.

When Kanye caught wind of it, however, he didn’t find it to be a laughing matter. Ye went on one of his trademarked Twitter rants, which he hasn’t done in a while.

JIMMY KIMMEL, I DON’T TAKE IT AS A JOKE…. YOU DON’T HAVE SCUM BAGS HOPPING OVER FENCES TRYING TO TAKE PICTURES OF YOUR DAUGHTER

YOU CAN’T PUT YOURSELF IN MY SHOES. YOUR FACE LOOKS CRAZY… IS THAT FUNNY?… OR IF I HAD A KID SAY IT WOULD IT BE FUNNY???

SHOULD I DO A SPOOF ABOUT YOUR FACE OR YOU FUCKING BEN AFFLECK…#NODISRESPECTTOBENAFFLECK #ALLDISRESPECTTOJIMMYKIMMEL!!!!

I LIKE YOU, YOU KNOW ME, I WENT TO YOUR FAMILY’S WEDDING

WHO YOU MADE IT CLEAR TO ME WASN’T YOUR FAMILY WHEN I WAS ON THEN PHONE WITH YOU 5 MINUTES AGO, YOU MANIPULATIVE MEDIA MUTHERFUCKER.

SARAH SILVERMAN IS A THOUSAND TIMES FUNNIER THAN YOU AND THE WHOLE WORLD KNOWS IT!!!

So yeah. He wasn’t happy. Jimmy’s tweets in response were typically hilarious.

apparently @KanyeWest is VERY VERY ANGRY with me….

if it’s not too much trouble @kanyewest, would you mind using @jimmykimmel ? Thanks

Jimmy elaborated a bit more on the Kanye situation on his show. He described how Kanye called him on the phone and told him that he was 2Pac and one of the most powerful voices in media.

While I love Rantye West, I wish he would grow a thicker skin and rail against things that need to be railed against. This lightweight kiddie skit ain’t it.