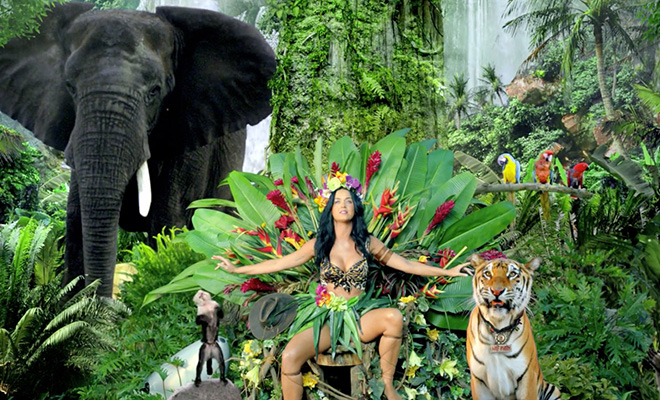 Whatever could Katy have possibly done to earn their public scolding? Be so successful that it only makes sense they use her name to score cheap headlines? Well, duh. But no really, they’re mad at her featuring exotic animals in her “Roar” music video. Good lord, do these people get on my nerves.

PETA wrote in a letter: “Animals used for entertainment in film and television endure horrific cruelty and suffer from extreme confinement and violent training methods.”

They proceeded to call the production “traumatic” for the animals since they become “stressed” and anxious” in situations like music video sets. Moreover, they claim directors may have been supplied an exhibitor that in the past has receive criticism for risking the health of animals.

PETA ended their rant by suggesting that in the future Perry look to Rise of the Planet of the Apes for an example of how to incorporate wildlife into their visuals. They note the film “featured wonderfully realistic computer-generated chimpanzees.”

Yes, because a Hollywood blockbuster film would have the budget. Again, these people get on my nerves.

While Perry’s camp didn’t respond, Dr. Kwane Stewart, chief veterinary officer and national director of of the No Animals Were Harmed® program, issued the following statement to E! News:

“American Humane Society was on set for the filming of [‘Roar’], which used an elephant, a monkey, birds and a tiger. After reviewing the reports, we believe that the Guidelines for the Safe Use of Animals in Filmed Media were followed and that no animal was harmed in the making of this music video.”