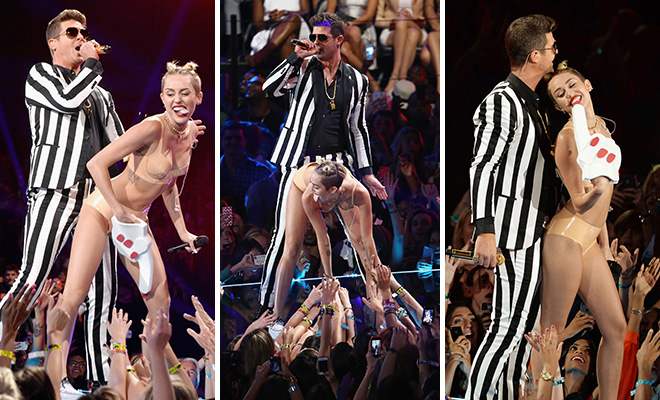 Miley Cyrus‘ performance last month at the 2013 MTV Video Music Awards was a “vulgar,” “distasteful” “disgrace” and not only should Cyrus be fined for her “lewd and lascivious shenanigans,” but she should also be “detoxed form her behavior, her clothing, her dance moves and taught how to keep her tongue in her mouth.”

Or at least that’s how the 161 people who inundated the FCC with a flurry of complaints felt. And thanks to the FCC’s policy of making complaints available to the public (and a request from The Smoking Gun) we can all point and laugh at pearl-clutching prudes who have way too much time on their hands.

One shocked viewer from Maryland from wrote: “She backed up against her male co-singer’s genitals in a doggy-style position and humped him like a bitch in heat … Had I wanted my family to see a hooker perform a live sex show, I would have taken [them] to Tijuana.”

Another outraged viewer, this one from a small town in Pennsylvania said that she was watching the VMAs with her granddaughter and became “very embarrassed” when Miley performed. “I think this was much, much worse than that disaster at the Super Bowl with one of the Jackson girls,” the clearly out-of-touch woman wrote.

Another offended viewer — from Indiana — pointed out that “Miley Cyrus’ performance may have been okay in a strip club where people put currency in her clothing, but NOT on TV.”

What makes these ridiculous complaints even more hilarious is the fact that while the FCC has the authority to penalize broadcast television outlets like CBS or NBC for airing things that are considered to be “indecent,” TSG points out that they have no authority what-so-ever over cable networks, like MTV, for instance.

So in other words, these people are doing all of this hoopin and hollerin’ for nothing.

The general consensus among most of the complaints was that Miley should be fined heavily — “A fine needs to be laid down, a HEAVY fine, and stricter guidelines so we can get back to decent television and entertainment,” one viewer from Tennessee wrote — but one complainer said that in addition to the fine, Miley should be “spanked” for her “awful behavior.”

And that’s just the tip of the iceberg. Deadspin has EVERY SINGLE COMPLAINT HERE, and their sister site Jezebel helped round out some of the best, which you can read below:

You should have taken it off as soon as she starting promoting her filthy actions. She has shown what she is acting like a devil flicking that tongue as deamons do. Being a Christian Im taking a stand as these people push vulgarity and teaching women to act like trash is not going to stand for a woman being a lady would never conduct herself like that.

Miley Cyrus (an actress/recording artist) twerked (danced a provocative booty dance) up against Robin Thicke’s (a recording artist/actor) genitalia. Also, she groped a woman’s posterior-without hesitation. In addition, she made very sexually suggestive gestures, using a giant foam-like “fanatic’s finger” as if it was a phallus.

the show that miley cyrus put on was a disgrace! i was watching this show with my granddaughter and was very embarrassed. i think this was much, much worse than that disaster at the super bowl with one of the jackson girls.

The Miley Cyrus performance on the MTV 2013 Video Music Awards rubbing her genital area with a “foam” finger like those used at stadiums along with her grinding dance performance with singer Robin Thicke was vulgar and distasteful. Dressed in a “skimpy” latex bikini, she bent over to rub her buttocks against Robin Thicke’s groin which caused him to have a slight erection which can be easily noticed through his pants.

Miley Cyrus touched her genitals and touched the genitals of an older man while performing music. She exposed her tongue numerous times while grinding her exposed buttocks on the front of the pants of the male performer in a simulated sex scene while performing. She also simulated oral sex with a foam finger. The performance crossed the lines of common decency and penalties should be enforced.

Miley Cyrus needs to be detoxed from her behavior, her clothing, her dance moves, and taught how to keep her tongue in her mouth. I suggest 12 months in a convent! However, it’s time the FCC stepped in and put this program on notice that they’ve gone waaaay too far, and to shut them down, and fine Ms Miley Cyrus for her lewd and lascivious shenanigans!

VMA Awards and Milye Cyrus: Need I say more? She was crude, pornographic, and absolutely shameful. Had I wanted my family to see a hooker perform a live sex show, I would have taken her to Tijuana. It was, at best, a third rate exhibition of what a pedophile would like to see during a child pornography live show. When she started throwing her hand and arm in a manner to simulate a male jacking off, that was bad enough. Then she continued to fondle herself with a foam finger, and then she backed up against her male co-singer?s genitals in a doggy-style position and humped him like a bitch in heat. This went on for several minutes. […]

If the FCC doesn?t fine the network, then the FCC doesn?t have any business using my tax money for anything at all. Trust me when I say, I will moniter what the FCC does about this, and then call my Senator and Congressman about this new ?hands-off? attitude the new FCC has. Do your fucking job (I would normally not use the word ?fucking?, but you don?t really seem to care about such things anymore.

[…] I sat down to watch some PG rated TV with my family and we got a crude, pornography, sex show shoved in our face. Sure I could turn it off ? I DID! But I would have like to have known BEFORE I sat down with the family to watch this vulgar and offensive show. Once my family saw this disgusting behavior, it was too late. I thought the FCC was there to protect us against such atrocities. Guess not. I?m more ashamed of the FCC than anything else. Shame on you! Do something!! Fine the network. Fine Milye Cyrus. Make a damn speech or something. Just do SOMETHING.

MTV should be severely fined for allowing profanity on the network. The VMA Awards promoters should be fined at an even greater rate than MTV for allowing such programming on the air, and Miss Milly Cyrus should be fined and jailed for performing such sexually provocative material on TV and being a family show being aired during the early evening hours. Of course I’m looking for an answer. I already know nothing will happen to any of these people, especially since our nation has become a truly Liberal Socialist nation now. But thanks anyway.