GOSSIPONTHIS.COM Celebs Jessica White: I Did NOT Copy Rihanna’s Style! 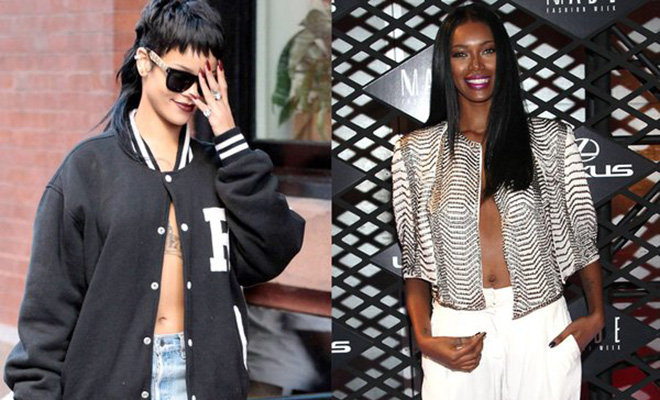 In the age of “Bitch Stole My Look,” “Who Were It First,” and side-by-side comparisons of presumed lewk-jackers, I suppose you can’t blame Jessica White for making clear that she isn’t biting Rihanna’s style.

At a DKNY party earlier this week, New York magazine’s The Cut caught up with the model and asked her about Rih-Rih’s “Soho stroll.” The term refers to the pop star walking around without a shirt.

If you didn’t know, Jessica has been known for rocking the braless look for sometime now. When asked about Rihanna’s take on trend she’s known for, she said:

“Yes, I saw it. She looked amazing,” said White approvingly. But for the record, she did it first. “I actually just did that on the red carpet at the Media Fashion Awards,” she added. (It’s true, she did.) “I wore this old-school vintage top, and I had nothing under it. So, I did it two days before she did it.”

This is a very polite, politically correct way of conveying the “pay homage” sentiment.

You know who could learn from this? Everyone. Yes, everyone, but particularly Azealia Banks.

Like, this is how you should’ve handled the Lady Gaga mermaid issue. Let someone come to you, acknowledge who did what first, then you slip in with a sweet compliment before making sure you point out you were the first.