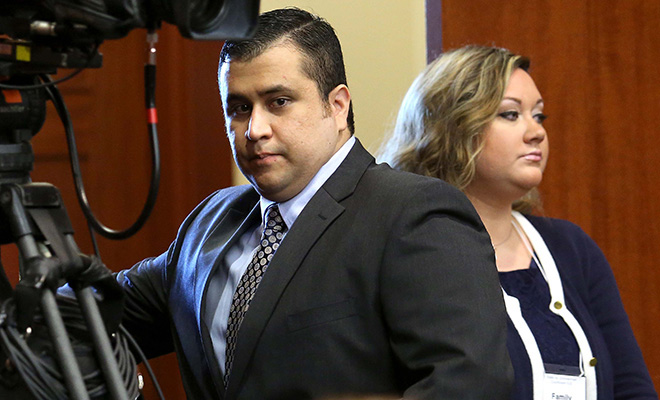 For further proof that in addition to just being an all-around awful person, George Zimmerman is a raging, gun-toting lunatic, look no further than today’s reports detailing an altercation that went down at the home of his estranged wife’s parents earlier today.

Shellie Zimmerman, who filed for divorce last week, reportedly called 911 on George Monday afternoon (Sep 9) after he allegedly (ALLEGEDLY) pulled a gun out on her and her parents.

According to ABC News:

Zimmerman, acquitted in July of the murder of teenager Trayvon Martin, claimed that he was acting in a “defensive manner” during the incident, according to police, who later added that they never found a gun on Zimmerman.

Nevertheless, Zimmerman was handcuffed and questioned by police in Lake Mary, Fla., according to Lake Mary Police Chief Steve Bracknell.

He was later released without charges when his wife and father-in-law refused to press charges or give police a sworn statement. Police said they are reviewing surveillance video from the home and reserve the right to file charges later based on the video.

It hasn’t even been two solid months since he was acquitted for Trayvon Martin’s murder and George Zimmerman is already pulling out guns on people.

WHAT IS THIS GUY’S PROBLEM?!?

Police Chief Steve Bracknell said Shellie Zimmerman called 911 claiming that George had a gun and was “making threats” against her and her parents David and Machelle Dean.

“He’s in his car and he continually has his hand on his gun and he keeps saying ‘step closer’ and he’s just threatening all of us,” Shellie Zimmerman said in the 911 call, adding that George Zimmerman was “trying to shut the garage door” on her.

“He punched my dad in the nose my dad has a mark on the nose. I saw his glasses were on the floor,” Shellie Zimmerman said in the call. He then accosted my father then took my iPad out of my hands. He then smashed it and cut it with a pocketknife, and there is a Lake Mary city worker across the street that I believe saw all of it.”

But here’s where things get a little … “weird.”

When authorities arrived on the scene, they couldn’t find a gun and Zimmerman himself said he never had a gun on him to begin with, and Shellie also backed him up, saying she never told dispatchers she actually SAW a gun, she just thought he was reaching for it. Or something.

“We did not take a gun at all, because there was no reason to take a gun, because his gun was in his truck,” Bracknell said.

Shellie Zimmerman, police said, told them she never saw a gun but saw George Zimmerman’s hands near where she believed he would have had a weapon.

The incident comes just a few days after Shellie Zimmerman told ABC News in an interview that she wasn’t sure she “ever really new” her husband, even after seven years of marriage, and she also talked about how he verbally abuses her.

“I think I’m realizing that I have been married to a person for almost seven years, and I don’t think that I ever really knew him at all,” she said, adding that he was “selfish” and “all about George.”

Shellie said she stood by her husband throughout the Trayvon Martin murder case, but she didn’t feel the need to be a part of his life anymore after he was acquitted back in July.

“I stood by my husband through everything and I kind of feel like he left me with a bunch of broken glass that I’m supposed to now assemble and make a life. … It’s just heartbreaking,” Shellie said.