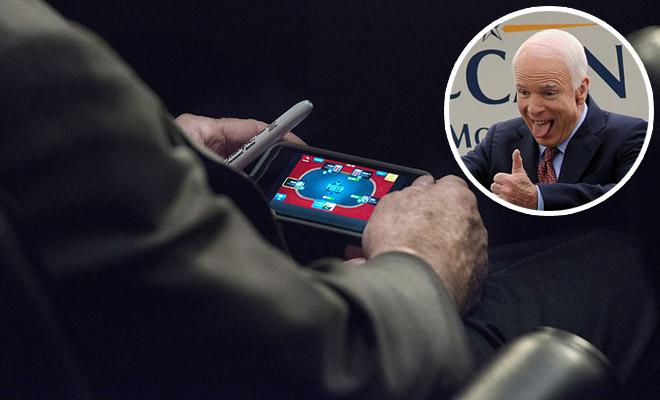 You’re Senator John McCain, and you’re forced to sit through a 3+ hour Senate hearing about important world issues, like, oh, I don’t know, THE POSSIBILITY OF THE UNITED STATES GOING INTO ANOTHER WAR.

So what do you do to kill the time? You play Poker on your iPhone, of course. Because … why not?

Washington Post photographer Melina Mara scored this gem of a photo showing the guy who could’ve been our president “passing time on his iPhone” during a U.S. Senate Committee on Foreign Relations meeting on Tuesday (Sep 3) concerning the potential use of military force in Syria, including, but not limited to, dropping a bomb on the embattled country in retaliation for their use of chemical weapons.

After the photo made the rounds on Twitter, McCain, caught red-handed, tweeted:

He further explained his shenanigans on CNN’s “The Situation Room with Wolf Blitzer.”

“As much as I like to always listen with rapt attention constantly (to) remarks of my colleagues over a three and a half period, occasionally I get a little bored and so I resorted,” he said, chuckling. “But the worst thing about it is I lost thousands of dollars in this game.”

Of course it was only “fake” money though.

This Twitter user pretty much sums up why this is so bad for our country:

@SenJohnMcCain so you admit to playing games on US Taxpayer salary? While at a hearing? And think it funny?

You can’t be too mad at John McCain though. Remember that one time he accidentally endorsed President Obama instead of Mitt Romney? The guy just doesn’t have it all!