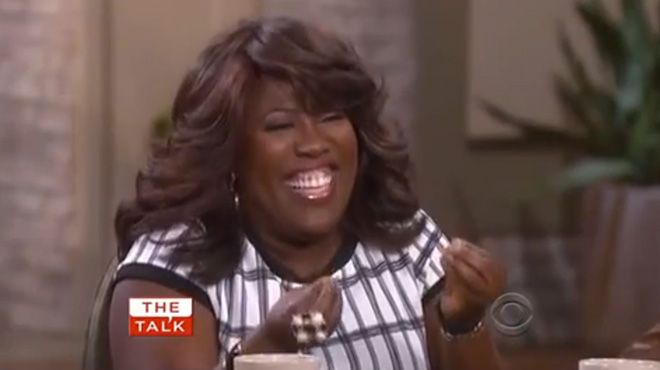 When the top of discussion turned to saving children’s hair — they were talking about Heidi Klum keeping a zip-lock bag full of her biracial kids’ hair clippings for art projects — Sheryl quipped:

“I’m sorry but why would you save afro hair? You can’t weave in afro hair. You ain’t never seen us at the hair place going, ‘Look here, what I need is the curly, nappy beads. That just seems nasty.”

Co-host Sara Gilbert then chimed into the discussion, saying she saved some of her son’s hair from his first hair cut:

“I totally get this. I don’t know if I’m weird but I have my son’s first haircut”

To which Sheryl responded:

“Which is probably some beautiful long silky stuff. That’s not what an afro is.”

Well, needless to say black people let her have it on social media and ultimately Sheryl went on an apology tour. Calling into The Steve Harvey Morning Show, Underwood said:

I want to apologize at my recent attempt at humor that missed the target and hit my people squarely in the heart. To all of you, I say I’m very sorry for my failed attempt at humor surrounding something that’s very sensitive to us: our hair. I could use this time to try to explain the intent on what I said, but misunderstanding aside, the way the joke came out offended my people and my community which was not my intent.

[…] My choice of words was wrong and inappropriate. I hope that in time you can forgive me. […]We make mistakes all the time, and I will use this as a learning experience to reflect on the power of words and how I personally use them. And I hear you. You’ve reminded me about the enormous platform that I’m blessed to have and that my words have power. Again I hear you. I’ve always portrayed myself onstage and on TV and anywhere you see me to be strong enough to take the hit, especially when I’m wrong. All jokes aside, I was wrong. I made a mistake. I juxtaposed images that are continuously hurtful to our people and for that I am truly sorry. For those who say it’s not enough, I can only ask that you let time heal this wound. Some of you have said things that are hurtful and we are not a people of slurs but we are a people of forgiveness. I made an inappropriate joke and an unfortunate statement that hurt the community that I love and work tirelessly for. I’ve worked over the years to earn your trust and your respect and I’m going to work even harder to get it back. Please accept my apology and I ask you for forgiveness and hopefully today this is where it starts.

Even if presented in the form of a “joke,” there’s a mentality behind it. A mentality that is self-loathing, and yes, rightfully found offensive by Black people who like their hair even if it isn’t “silky” by nature.

That said, she did apologize and maybe, just maybe, she’ll be sure not to step in it anytime soon. If she does, CBS won’t waste time replacing her with another Black. Just ask Holly Robinson-Peete.

WATCH THE CLIP AT THE TOP!