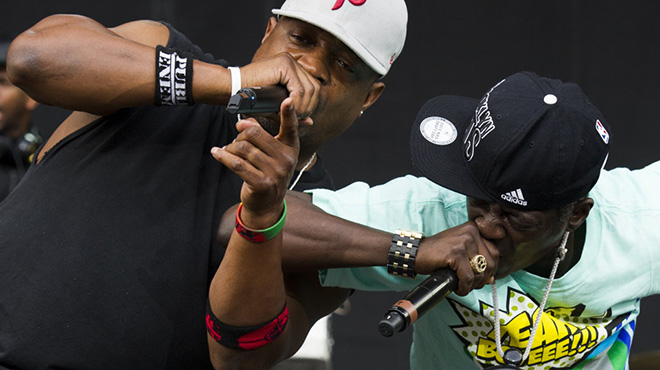 Iconic rap group Public Enemy was among the performers who graced the stage Saturday night during day one of the 2013 “Made in America” music festival in Philly.

Backed by a DJ, live band and even backup dancers, Chuck D and Flavor Flav delivered what Philly.com called a “politically charged set.” Their dancers were dressed in all-black military clothing, and their set featured their trademark political commentary.

At one point during the performance, Check D shouted, “He got killed in cold blood!” referring to the shooting death of Trayvon Martin and the recent acquittal of his killer George Zimmerman.

The rap vets also spoke out against racism , on behalf of underfunded public schools in Philadelphia, and in support of convicted cop killer Mumia Abu Jamal.

Before they hit the stage, Public Enemy reps held up a huge banner that read “FREE MUMIA ABU JAMAL” in reference to the man who is currently serving a life sentence in prison for the 1981 murder of Philadelphia Police Officer Daniel Faulkner.

WATCH PUBLIC ENEMY PERFORM AT THE 2013 “MADE IN AMERICA FESTIVAL ABOVE!