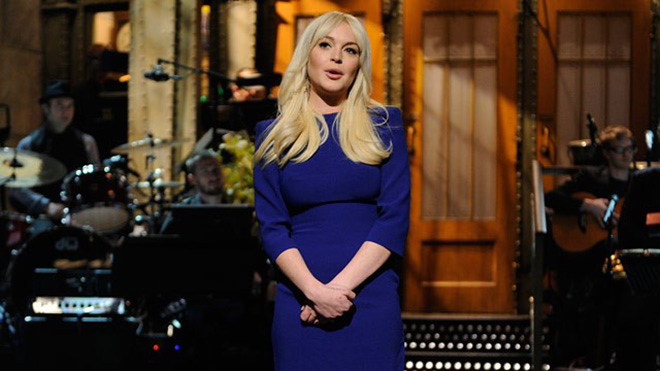 The last time Lindsay Lohan hosted ‘Saturday Night Live,’ she looked as if life just finished drop kicking the hell out of her face for the 15th time. I’m not sure that will change when Lindsay Lohan gets her fifth opportunity to host the show, but here’s hoping she’s at least funny this time.

According to Radar Online, Lindsay Lohan has been asked to host the season opener for the show. Why? Because no matter how much people say they’re sick of her, Lindsay Lohan remains a ratings winner.

“Saturday Night Live has approached Lindsay to host the show again, and they were talking about the season opener,” a source close to the situation told RadarOnline.com.

“She is definitely considering doing it,” the source said. “She loves the show and the people involved.”

Lindsay has hosted the hit NBC show five times, and the last time, in 2012, she was panned for her erratic performance just months before entering her three month rehab stint.

However, the source said things are different for her now.

“Lindsay is doing really, really well. She is going to business meetings and she’s been on time for every single one of them. This is the best I’ve seen her in years.”

I want to believe this, truly. However, we’ve heard this so many times before.

Lindsay can be funny with great material. In fact, I hope one of these business meetings involved Tina Fey. That’s who she needs. Yes, between Oprah and Tina Fey, her career can really get back on track.