GOSSIPONTHIS.COM Celebs Katie Holmes and Jamie Foxx Danced Together, But They’re Not Dating 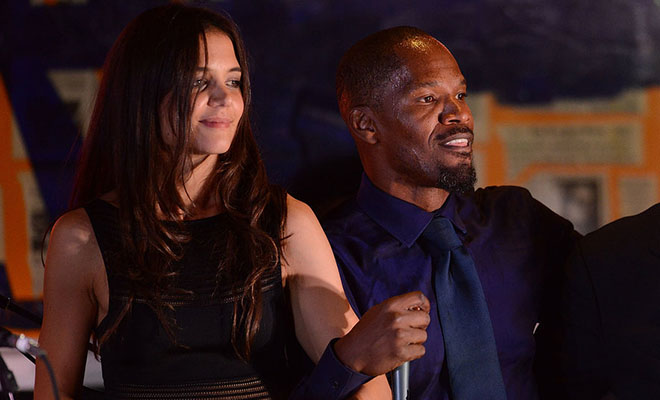 Who knew there was a rumor that Jamie Foxx was courting to become Suri Cruise’s step-daddy?

Apparently, after photos and video of Katie Holmes dropping down and getting her eagle on with Jamie Foxx at Ron Perelman’s Apollo in the Hamptons benefit last weekend were made public, folks in Hollywood started whispering that the two were an item.

I mean, I’d call that an upgrade. Jamie has an Oscar, is not crazy, and has widening money now that he is getting into the production end. And again, he’s not crazy. Shade but no shade, Tom Cruise.

However, this is just wishful thinking on the part of messy ass people who have nothing better to do than run their mouths — to the delight of gossip writers scratching and scouring the Web for content.

So yeah, get those thoughts of these two good loving, body rocking, knocking boots all night long because they are not a thing. Katie’s rep Leslie Sloane, told Page Six: “They’re not dating. They’ve been friends for years.”

I’m mad Katie’s rep even had to say anything about this. People act like they’ve never bent over and bust it open on the dance floor in the name of friendship. Grow up.