And we pick up where we left off: Creepy brain-shrink Vogel revealing to to Dexter that she knows his deepest and darkest.

We see her 1980s-era videotaped interview with Dex’s dad. Harry is explaining that his stabby son wanted to see a murder scene, so he snuck Dex onto one and he found it more fun than a water park and roller-coaster park combined.

Harry is wound so tight that he wears his shirt buttoned to the top with a tie even while confessing his parenting issues, no acid-watched jeans and Swatch for this man. Also, this marks the first of this hour’s “But Why…?” question flares: Why would a cop talking about such sensitive and criminal family secrets allow his interviews to be videotaped?

So as many of you suspected last week, Vogel proudly helped Harry write The Code. She’s his silent ghost writer, as it were. Dexter describes her as Dr. Frankenstein even faster than us recappers can reference it. “I should have chilled some champagne,” she says of their meeting in her white austere bachelorette pad.

We learn the brain-scooping serial killer that Miami Metro is hunting left a piece of his last victim on her doorstep. She suspects the killer is a former patient, perhaps one who’s angry about her “unorthodox” and possibly illegal treatment methods. She wants Dexter to take him out before the police find him and he spills her secrets, or before he kills her. “Sooner or later, somebody’s going to be holding a piece of my brain in a jar,” she says — good motive.

“I don’t take requests,” Dex says, so she gives him another video to help persuade him. Dex watches this one alone, which gives memory-projection Harry an opportunity to make an appearance. This tape shows Vogel defending Dex’s behavior to Harry.

For a brief moment I thought she was blackmailing him, but that doesn’t make sense because the tape implicates her too. Harry points out she believed in Dexter. “If she’s responsible for creating me she’s responsible for what I did to Deb,” he says, which is stretching to blame the doctor for that one.

Across town or something, hung-over Deb is meeting with her boss Elway. She’s filling him in on the mess with the skanky jewel thief Briggs that her brother murdered for pretty much no reason last week. Elway shakes up some brown-ish nasty-looking liquid for her to drink, calling it “Electrolyte Replenishment Formula.” She actually gulps it, showing her lack of caution once again.

“So you two were intimate,” Elway says, and I like her response: “First of all, who says intimate?” Deb gets defensive. She denies she felt anything for Briggs. She was only sleeping with him to get the location of the merchandise he stole. “I was doing my job,” she insists. It’s like she’s annoyed that her boss might suspect her of not being a whore. How dare he!

She reveals Briggs’ key for a storage unit, so they might be able to get jewels after all. So Elway and Deb check out Briggs’ apartment. He marvels at a photo of Briggs: “You really had sex with this guy…”

Oh Elway. Deb didn’t have sex with Briggs despite him being a douchey lowlife, she had sex with him because he was a douchey lowlife. Lose the suit and condescending attitude and you might have a chance. Deb finds a bill for a storage facility where the jewels might be kept.

Skate-park crime scene. Dexter notes, “Miami makes more corpses than sunburns,” a line that’s not going to be a Florida tourism slogan anytime soon. A body was killed with same m.o. as last week’s death. “We got a serial,” says Batista. Quinn coins the name of the Big Bad this season: “The Brain Surgeon.” Pretty good.

Dexter finds a partial print, and he tells Vogel that they might have a head start on catching the killer who’s stalking her. He asks why his dad came to her in the first place. Her answer does not say that Harry and Vogel were sleeping together, but we’re all wondering it. And now Dex and Vogel are starting to have some odd chemistry too.

“You don’t trust me,” Vogel says. “Which you should have expected, since you know me so well,” he counters. Oh you two, just kiss already!

Dex gets a name on the print, and goes to the presumed killer’s apartment. He briefly considers his former trophy hiding place — the AC unit — nah. He finds a photo of hunting cabin, a clue to his location. At the cabin he finds the killer already dead. He’s hung on a meat hook, so … not a suicide. This case just got more complicated.

Vogel tells Dex her theory on psychopaths, and it’s an interesting one. She says “psychopaths are a gift of nature, not a mistake” and calls them “alpha wolves” who “help the human race survive long enough to become civilized” and that “without psychopaths, mankind would not exist today.”

Meannwhile, Deb goes to Briggs’ storage unit. After a brief rummage, she finds the jewels. Suddenly El Sapo is there — The Toad grabs her gun and takes the jewels from her. The old Deb would have been angry, but just trying to survive the encounter. This new self-destructive Deb rushes him. He beats the crap out her in a wince-inducing and effective fight scene (the episode was directed by Michael C. Hall).

“Stay down!” he orders. “You’re lucky I don’t kill people unless I’m paid to.” While she lays on the floor, we get a moment with Batista and Quinn. Batista is urging his friend to take an exam to become a sergeant. “You should be taking the career more seriously — especially if you’re going to be dating my sister,” he says, dropping the revelation.

Quinn asks how Batista knew. “Because I’m a good detective,” he brags. So Batista finally solves one mystery! At the risk of recycling a bit from last week’s recap, if Batista were truly a good detective he would have known this months ago — as well a that Deb killed LaGuerta and Dex is the Bay Harbor Butcher. But I guess it’s understandable. It’s not like there’s boxes of evidence and warrants against Deb in his living room or anything.

Later Quinn picks up Jaime. You get the feeling Quinn’s car smells like cigarettes and booze, with fast-food wrappers on the floor. Maybe this time they can finally have sex to completion? But no. Jamie rightly gives Quinn grief about mentioning his ex-girlfriend Deb yet again.

“What’s with you people?” he asks, referring to her and her brother — which isn’t the wisest word choice. For a second you think, okay, maybe he didn’t mean that the way it sounded. But Quinn doubles down, calling their concern a “Cuban thing.” She storms out of his car. Quinn’s not getting any Cuban-thing tonight.

Jamie goes back in the house and yells at her brother for interfering. Though Jaime was totally right to give Quinn a hard time about his Deb-focus, she’s now blaming her brother and her lover for a fight that she started.

Dex in his lab. He runs some blood from the El Sapo crime scene and discovers — it’s his sister’s blood. Director Hall indulges in a Jaws-style “dolly zoom” for added visual effect. He sees Deb return to the station to answer Quinn’s unsuspecting questions about the jewelry case. Deb starts having post-traumatic flashbacks to shooting El Sapo and Dex hustles her out of there before she blurts out the truth.

Deb explains she shot El Sapo after her beat her up. Dex tries to criticize, but finds he has no moral ground to stand on. “All of a sudden we have a problem with lying?” she says. “You really want to play the What If game?” Unlike Dex, however, she’s not very good at covering her tracks. She left her gun in El Sapo’s glove box. “It will be traced to you, how will you explain that?” he demands.

But wait: Can Deb first explain how she shot El Sapo when he took her gun and put it in his glovebox? Did she have a second gun on her? Maybe it was in her car? So are we to assume she rushed out all wounded, to the same parking lot El Sapo is in, got her second gun and and shot him before he drove away all sneaky like? And we’re all still waiting to know how Deb was able to shoot LaGuerta with her gun and get away with it, right?

It’s like: With a storage unit full of random stuff, Deb could have killed El Sapo through his window a lot of different ways. But the writers picked a weapon that would result in the most confusion. “He’s not the first person I shot and he may not be the last,” Deb warns. “Anything can happen in this hell hole that is now my life. Your gift to me, Dexter!”

Oh man. It’s like a really bad breakup. And we totally believe her threat, because she apparently has an endless supply of non-traceable guns. Dex goes to switch out her weapon from the evidence room. When he says, “I’ll never get used to doing this for Deb,” I think we’re supposed to take the hint that this is what he did when LaGuerta was shot.

Dex goes to Vogel’s house, where The Brain Surgeon broke in and left another present, a DVD showing the killer forced the strangler to throttle his victims, then killed the strangler. So this is a killer making other people do his kills. But Dex is distracted. “I’ve destroyed Deb,” he says. Vogel gives him the world’s most inappropriate mom-hug: “You’re exactly what you need to be, Dexter,” she coos. “Perfect.”

So deadly despairing Deb has struck again. And this time it’s cold premeditated murder. Nobody’s twisting her arm now. How do we feel about this? And will she become a serial killer too? She’s only one murder shy of fitting the definition.

Oh, and Deb … so what are you gonna do with those jewels…? 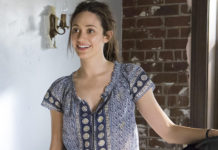