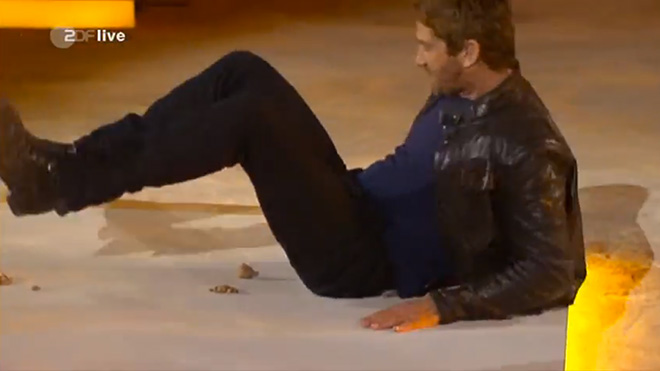 Now there’s something you don’t see every day. While appearing on a German talk show this week, Gerard Butler proved that he has an unusual talent — he can crack a walnut with his butt!!

The star was a guest on “Wetten, dass…?” to promote the European release of the action flick “Olympus Has Fallen” when he agreed to partake in what looks like an Olympics-inspired ceremony. The only difference between the Olympics and what took place on the popular show is the fact that crushing walnuts with ones’ butt was a part of it. And we have to say, for a man put in a ridiculous situation … he looks pretty bad ass.

Oh yeah, he also poured ice down his pants, because why not?

So if you liked that video of the ruggedly handsome Scotsman doing the harlem shake … .you now have something else to re-watch a hundred times.