Jay Leno seems like a nice fellow, but his jokes tend to only be hilarious to people who love humor along the lines of “Pull my finger.” However, in a recent sketch called Pumpcast News sketch — in which a fake newscaster tries to freak out people by talking to them as the pump their gas — miraculously, it didn’t make me want to yell out to the TV, “What in the f**k is this bulls**t?” Much of that has to do with the happy singing Black people at the pump who participated.

Do you know what I love most about this couple? Once her man started singing Bon Jovi out loud and doing a lil’ sway, she hopped out of the car to join him. Okay, it took a little coercing, but not very much. She was getting her life and he was eager to play the Kelly to her Beyoncé.

Now that is love. Let that be a lesson to us all: The couple that sings off key and twirks something together, stays together. Still going to watch Letterman tomorrow, though. 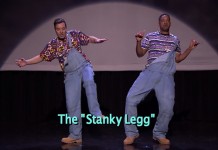 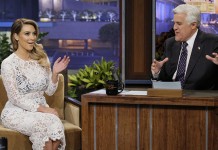