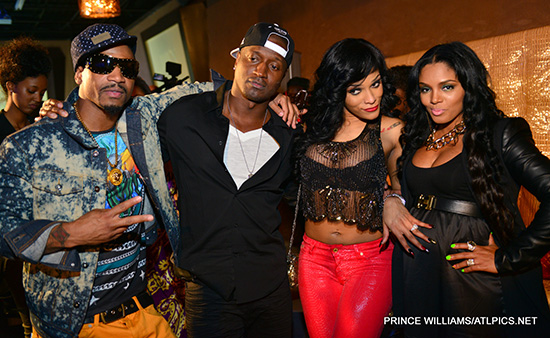 Are you ready for round 2 of “Love & Hip Hop Atlanta?” Of course you are. Now get into these flicks from the season 2 premiere party.

Held at the Cream Ultra Lounge in Atlanta, the whole gang (minus a few) got together for the official viewing party for season 2 of LHHA.

Joseline Hernandez and her on-again, off-again boo “Steebie J” were there. So was Lil’ Scrappy’s boo thang Shay and his baby mama Erica Dixon.

Thankfully, no fights broke out at THIS event between Scrappy’s two ladies, although strangely, Scrappy himself was not at the event. (He’s probably working the late shift at Wendy’s to cover his legal bills, to be honest).

Newcomers Che Mack and DJ Traci Steele were also in the building but it’s really hard to muster up two fucks to give about either of them right now.

The big surprise was Rasheeda and her pregnant belly making its debut. Yup, you heard right. That old lady who’s been trying to break through as a rapper since the ’90s is actually pregnant. Her husband Kirk dropped his seed off just in time, ’cause you know there were only about three eggs left in Ms. Rasheeda’s dusty womb.

If you’re wondering where the Queen of Ratchet K. Michelle was at, I am too. She apparently didn’t show up and neither did Karlie Redd, although her hunchback ex-boyfriend Benzino did.

CHECK OUT THE PHOTOS FROM THE LOVE & HIP HOP ATLANTA SEASON 2 PREMIERE PARTY BELOW: