GOSSIPONTHIS.COM Celebs Here’s Your First Look at Jamie Foxx as Electro in “The Amazing...
17
SHARES
ShareTweet Jamie Foxx is almost unrecognizable in his newest movie role. Yesterday, pictures were posted online showing Foxx as Electro in “The Amazing Spider-Man 2.” The pictures are the first unofficial look at Foxx in the movie, and were taken while he was shooting a scene in Times Square on Monday.

“Electro is a great character,” Foxx told Entertainment Tonight last year. “He’s a … genius electrician-type person, and he gets the short end of the stick from the whole world, and the next thing you know he turns it on.”

CHECK OUT THE PICS OF JAMIE FOXX ON THE SET AS “ELECTRO” BELOW: 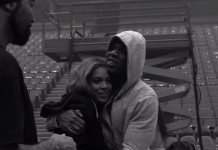 Behind the Scenes of Beyonce’s H&M Campaign Shoot (VIDEO)

Behind the Scenes of Beyonce’s Pepsi “Mirrors” Commercial