Gerard Butler may be a bit late to join in on the fun, but a video has surfaced showing the actor doing the “Harlem Shake” with a group of British soldiers at the Wellington Barracks army base in London, ahead of a special screening he hosted for his new movie “Olympus Has Fallen.” And it’s pretty hilarious, even though everyone else was doing that ridiculous dance MONTHS ago, hehe. 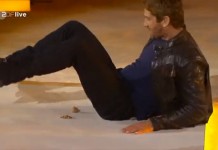 Watch Gerard Butler Crack a Walnut With His Butt

LeBron James and the Miami Heat Do the Harlem Shake (VIDEO)

You Might Be Sick of the “Harlem Shake,” But Now It’s the Number One Song in the Country