You’d think that she would know better than to rush into marriage at a young age after seeing how things went down for her twice-divorced sister Britney Spears … but alas, Jamie Lynn Spears is getting married at the ripe, young age of 21.

Spears, who has has a four-year-old daughter named Maddie Briann is engaged to her boyfriend Jamie Watson.

The fame lover announced her plans to get hitched by posting a photo of her engagement ring on Instagram.

But that isn’t the best part. Watson is 30 years old, and doesn’t appear to have a job. Good choice Jamie!

Her big sister tweeted this morning:

So excited and happy for my sister, congrats @jamielynnspears – love you.

In 2007, at the age of 16-year-old, the youngest Spears announced via OK! magazine that she was pregnant with then boyfriend Casey Aldrige’s baby.

Three years later, she explained (in a piece in Glamour magazine) that she became pregnant because she was “too scared” to ask for birth control.

That’s a good one.  Wonder what her excuse is for getting married to a 30-year-old bum? She was “too scared” to say no to his proposal? 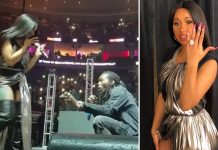