Last night’s Oscar host Seth MacFarlane left no stone un-turned, tackling everything from Chris Brown and Rihanna and the assassination of Lincoln. He also reenacted Denzel Washington in “Flight” with sock puppets, and made out with Sally Field.

While some have praised the “Family Guy” creator’s bits during the musical themed ceremony others have lambasted him for going to far.

That’s probably because being offended and calling for PC behavior has become the norm. Instead of appreciating the old Hollywood meets cartoonish humor feel, a number of viewers have branded MacFarlane’s jokes as “sexist” and “hostile.”

While a few jokes bombed — it’s didn’t help that many of the presenters were flat and most the speeches were dull — there were a number of moments in which MacFarlane hit it out of the park.

Here are his 10 best jokes from Sunday’s Academy Awards.

1. The one that made Tommy Lee Jones laugh:

“The story was so top secret, the film’s director was unknown to the Academy.”

“This is the story of a man fighting to get back to his woman, who has been subjected to unthinkable violence … or as Chris Brown and Rihanna called it, a ‘date movie.'” — Editor’s note: Not cool, but Seth MacFarlane will be Seth MacFarlane)

“A lot of controversy over the multiple uses of N-word in the film. I’m told, apparently, the screenplay is loosely based on Mel Gibson’s voicemail?” — Makes up for the crass Chris Brown/Rihanna joke

“Denzel Washington has a great sense of humor. He did all those “Nutty Professor” movies.”

“The actor who really got inside Lincoln’s head was John Wilkes Booth….What? 150 years and it’s still too soon?”

6. On Jane Fonda and Michael Douglas:

“They remember when this town was cocaine trees as far as the eye could see.”

“First time I saw him with all that dark facial hair I thought, my god, the Kardashians have finally made the jump to film.”

“To give you an idea of how young she is, it’ll be 16 years before she’s too young for Clooney.”

“Tonight’s ceremony is being watched by over a billion people worldwide. Which is why Jodie Foster will be up here later to ask for her privacy.”

“Ladies and gentlemen, our next presenter needs no introduction.” (walks away) 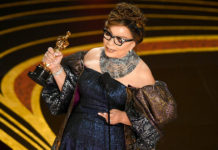