This weekend, “Saturday Night Live” aired a hilarious mock trailer for a forthcoming Quentin Tarantino film titled “Djesus Uncrossed.” The faux promo stars Christoph Waltz as a vengeance seeking Jesus, who rises from the dead and goes on a killing rampage, and according to The Hill, the Christian group Concerned Women for America are outraged by the sketch.

“SNL has, of course, always enjoyed their ability to offend in the past, but at least one could count on them to have the nerve to take on everyone equally,” the organization’s President Penny Nance said in a statement.

The group believes that the writers of SNL would not have spoofed Islam in the same manner — and they’re probably right — but jeeze, it’s just a good old fashion movie parody.

“Today, SNL would NEVER have the nerve to mock Islam as it did Christianity. They would never be brave enough to run a skit mocking Mohammad at any time — let alone during Ramadan.”

For those of you that weren’t offended and want to appreciate a lengthier version of the segment, show writer Seth Meyers recently tweeted a director’s cut of the skit. Check that out below: 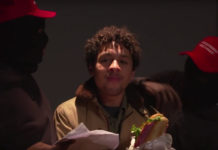