Jonn Hart — a new artist signed to L.A. Reid’s Epic Records — teams up with French Montana in the music video for the remix to his debut single “Who Booty.” The 23-year-old Bay Area native plans on releasing his “Hart to Hart” mixtape to showcase more of his material soon.

Check out Jonn Hart’s video for “Who Booty (Remix)” ft. French Montana below: 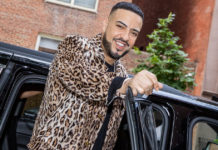