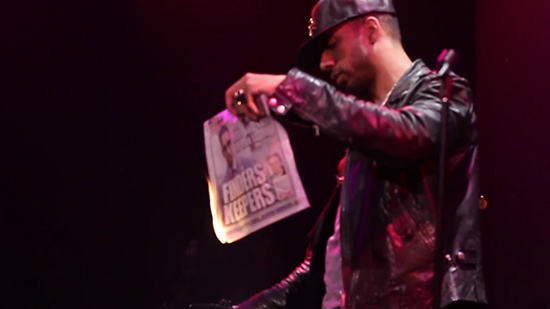 Ryan Leslie has been dragged to the forefront of the media once again over the case of his missing laptop. After the verdict Ryan Leslie found himself on the front page of The New York Post with the headline “Rap Weasel Must Pay $1M For Lost Laptop”

For starters those who do not follow Ryan Leslie may not know that he was a Harvard graduate at the age of 19 and, based on talents/abilities alone, is much closer to a musical genius than a “Rap Weasel.” Recently Mr. Leslie decided to use the LIU homecoming as his platform to respond to the verdict and all of his newfound critics. Ryan maintains that the music on his hard drive was never returned and that is why he refuses to pay the German man who returned it. At this point it is a case of two opposing sides blaming the other and Ryan has said he hopes to appeal the verdict.

Hopefully Ryan is able to settle something out of court with the plaintiff or he could be in quite a deep hole.

All of the emotion and backfire from the events surrounding his court case manifested itself as Leslie began to perform a record from his recent album Les Is More, and also set to fire a copy of The New York Post that blasted his actions.

It makes for a pretty intriguing clip and guests such as rapper A$ap Rocky came out to show their support for Ryan after the harsh news.

Check out Ryan Leslie’s emotional talk and performance below: