After releasing a few teaser trailers (really, what is the true purpose of those?) … Marvel has finally released the first official trailer for the next “Iron Man” movie!

Check out the “Iron Man 3” trailer, as well as the film’s synopsis below:

When Stark finds his personal world destroyed at his enemy’s hands, he embarks on a harrowing quest to find those responsible. This journey, at every turn, will test his mettle. With his back against the wall, Stark is left to survive by his own devices, relying on his ingenuity and instincts to protect those closest to him.

As he fights his way back, Stark discovers the answer to the question that has secretly haunted him: does the man make the suit or does the suit make the man?

Continuing the epic adventures of the first two “Iron Man” films, “Iron Man 3” — starring Robert Downey Jr., Gwyneth Paltrow, Don Cheadle and many others — is set to hit theaters on May 3rd 2013! 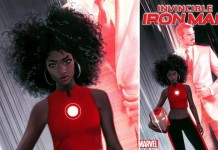