The official trailer for “Cloud Atlas” — starring Halle Berry and Tom Hanks — has been released, and you might want to take a bathroom break before watching … because it clocks in at nearly 6 minutes long! From the directors of “The Matrix,” the epic film, based on the novel of the same name by David Mitchell, explores how the actions and consequences of individual lives impact one another throughout the past, present and future … as one soul is shaped from a killer into a hero, and a single act of kindness ripples across centuries to inspire a revolution in the distant future.

The book-to-film adaptation of “Cloud Atlas” will premiere at the Toronto International Film Festival in early September, followed by a theatrical release on October 26th.

In addition to Halle Berry and Tom Hanks, the film’s all-star cast of the film includes Hugh Grant, Susan Sarandon, and others. 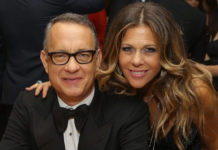