After six years and two children together, Hollywood hunk Matthew McConaughey and his Brazilian model girlfriend Camila Alves got married over the weekend.

According to reports, the couple tied the knot in a secret wedding ceremony, held in front of their loved ones and friends, on Saturday (Jun 9) at their home in Austin, Texas.

“Matthew looked so handsome, like an Old Hollywood movie star. And Camila was just glowing and beautiful!” an excited guest shared with People Magazine.

Sources close to the couple say they kept the ceremony’s details under wraps right up until the wedding Saturday night.

Guests — who reportedly spent the entire weekend on high-end campground, complete with air conditioned tents, gourmet food and lots of entertainment — said that Matthew and Camila’s wedding was non-traditional, and incorporated the couple’s roots with an “island beach meets Texas” theme.

A source told Us Weekly, “there were no groomsmen or bridesmaids. And there were two preachers, a pastor of a local church and a monk. They switched off saying remarks. The crowd erupted and there were many tears all around after they finished their vows. There was a lot of clapping and everyone was happy after they kissed.”

During the emotionally-charged ceremony, Mellencamp sang a song for the bride and groom based on a bible verse. “He made it into a melody,” a witness says.

Keeping up with the non-traditional theme, instead of reading pre-written vows aloud to one another, McConaughey and Alves whispered them into each other’s ears.

“No one knows what they said, but you could tell it was emotional because she was teary-eyed,” a friend told US Weekly. “Matthew loves her, there’s no doubt about that.”

After sharing a long, passionate kiss with his new bride, McConaughey thanked everyone for coming — officially kicking off the post-wedding celebration.

Guests moved into a massive party tent for the reception, where they noshed on rotisserie-style Brazilian meats and danced to a live band playing American pop and Brazilian rock hits.

McConaughey and Alves skipped the wedding cake — instead offering their partygoers a variety of desserts — as well as the traditional first dance.

Matthew McConaughey and Camila Alves, a handbag designer and model from Brazil, started dating in 2006 and have two kids together, a 3-year-old son named Levi and their 2-year-old daughter Vida.

They got engaged last Christmas, and Matthew announced the news via his WhoSay web page by posting a picture of the pair kissing, along with the caption: “Just asked camila to marry me … Merry Christmas!”

McConaughey’s latest movie “Magic Mike,” in which he stars alongside Channing Tatum as the manager of a strip club, hits theaters later this month, on June 29th. 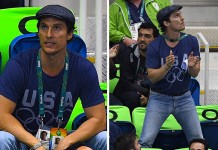 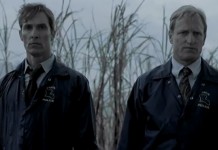