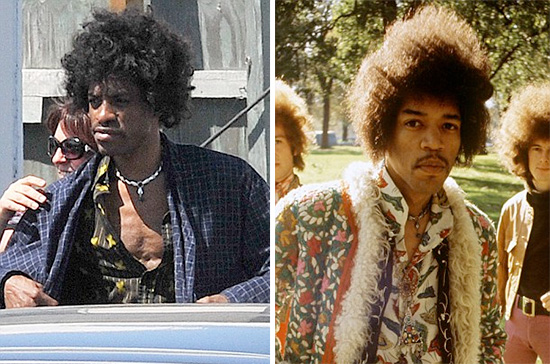 Andre 3000 is ready to rock as Jimi Hendrix in an upcoming biopic about the music legend’s life.

The Outkast rapper was spotted in Dublin, Ireland — dressed in full Hendrix gear — filming scenes for “All by My Side” on the first day of shooting on Monday (May 28). “All by My Side” focuses on Jimi’s career breakthrough around the time he moved to London in 1966, and will also follow the music icon as he worked on his classic debut “Are You Experienced?”

Though filming for the biopic is already underway, Jimi Hendrix’s estate is reportedly not on board with the project so far. Earlier this month, they released the following statement:

“Experience Hendrix, LLC [has] made it known many times in the past that no such film, were it to include original music or copyrights created by Jimi Hendrix, can be undertaken without its full participation.”

So don’t expect to hear any original recordings from Jimi Hendrix in the flick, as Andre 3K will most likely have to re-record all of the songs used in the film … which is actually pretty cool (and might turn out better) when you really think about it. Are you looking forward to Andre 3000 playing Jimi Hendrix and re-recording his music?