Cee-Lo Green reunited with his group Goodie Mob Sunday night (May 20) as they paid tribute to The Beastie Boys and the late Adam “MCA” Yauch at the 2012 Billboard Awards in Las Vegas.

In addition to the tribute performance, the Atlanta Hip-Hop group also performed “Fight to Win,” their first new track together in several years. 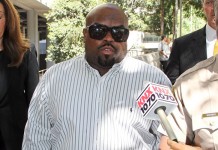