But the R&B crooner isn’t taking any offers just yet. “I don’t know what specifically I will do with this track in the future….and I don’t see myself ever performing it live, but I am flattered that people have embraced it and are having as much fun with it as I am,” he told TMZ.

Brian might as well perform the song … it will probably get him laid afterwards! (LOL) 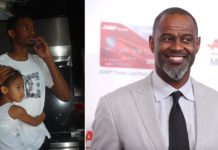 VIDEO: Brian McKnight – “Let Me Show You How Your P*ssy Works (If You’re Ready to Learn)”