GOSSIPONTHIS.COM Celebs Drake Reacts to Girl with Forehead Tattoo and Says He Wants to... 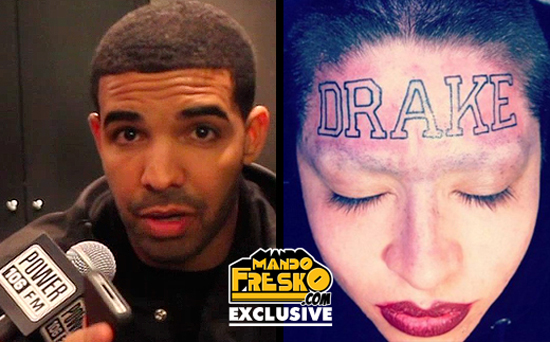 Drake isn’t bothered by the overzealous fan who got his name tatted on her forehead…..but he does want a piece of the tattoo artist who did it!!

In an interview with Power 106 radio personality Mando Fresko, the “Headlines” rapper revealed that he wants to meet the young woman and understand what made her get the tat. He also threatened to f*ck up the tattoo artist if he ever sees him out. I want to meet her and understand why and what happened? That’s cool though; I feel you 100%. To me that is absolutely incredible. The guy who tatted it is a f*cking asshole though, I will tell you that. I don’t f*ck with that guy! F**k you to that tattoo artist by the way because you’re an asshole for real. You should lose your job and never do tattoos again and I don’t f**k with you and if I ever see you I’m going to f**k you up.

But real sh*t though, I really, really want to talk to this girl and understand it all. It’s Love…it’s surreal. I don’t even want to look at it anymore because it’s super surreal.

Peep the hilarious footage of “gangster Drizzy” below: