Those rumors about Eva Longoria and Matt Barnes dating may be true after-all!

To add more fuel to the fire, Eva was spotted out yesterday picking the NBA star up from LAX airport.

Barnes attempted to cover his face with his hoodie, but from the looks of the pic above, his attempt wasn’t so successful.

Despite being seen together, sources are still claiming the two are not romantically involved and are just good friends.

We’re not buying this good friends bullsh*t one bit! Do they honestly think we believe she was the only person in the world who could have given Matt a ride? GTFOH!!! 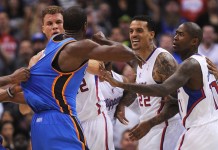 Matt Barnes Wants to Fight Serge Ibaka, But For Real This Time: “I Just Don’t Like Him”