The first official trailer for “The Hunger Games” has finally arrived!

“The Hunger Games,”one of the most anticipated films of 2012, is a sci-fi action drama based on the teen novel of the same name written by Suzanne Collins.

Academy Award nominated actress Jennifer Lawrence stars in the movie as a character named Katniss, who competes in the Hunger Games, a nationally televised tournament where two parties fight to the death. 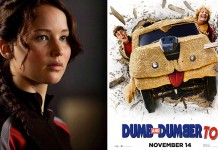 Jennifer Lawrence Cut “Dumb and Dumber To” Scene from Movie Because She Didn’t Like It?