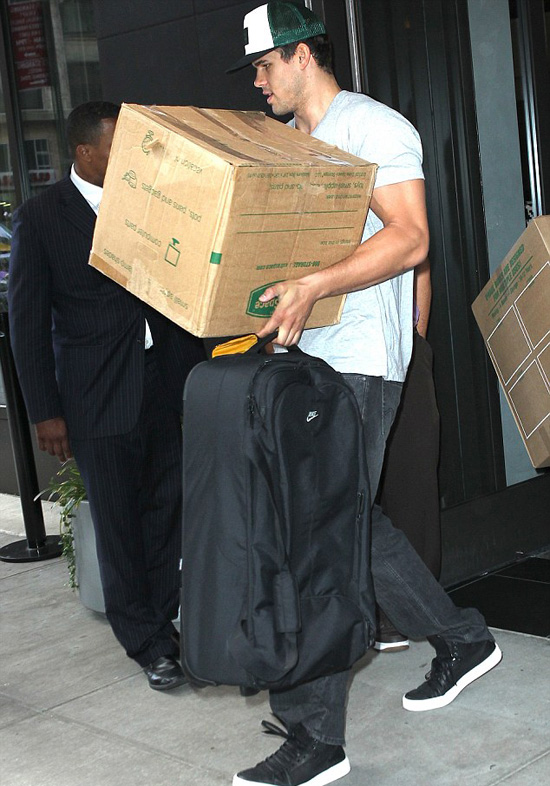 Is the marriage between Kim Kardashian and Kris Humphries already off to a rocky start after only 2 months?

Yesterday, Humphries was spotted carrying cardboard boxes and a suitcase out of the New York hotel he was sharing with Kim without his wedding ring, prompting already existing rumors that he and his new wife are already headed for divorce.

A source recently revealed to the New York Post’s Page Six that the two allegedly started having problems because Kim “isn’t willing to change her life, she works hard and cannot take any time out.” The source added, “And she doesn’t have time for his friends.” Another source added, “After the wedding, Kim and Kris started filming right away, they haven’t even been home yet. They haven’t had any time to settle in together. They have an army of people around them all the time. Kourtney [Kardashian] and baby Mason are in the adjacent room and they film until midnight every night. It’s hard for them to be alone and have any quality time together. Most newlyweds would struggle with that.”

Another “source” close to the couple told the UK’s Daily Mail, “I don’t know when they’ll announce the split or why they got married in the first place but they are done. They are divorcing. Kim has been staying in a New York hotel which Kris has failed to visit.”

Some other source (who are these people???) told Life & Style, “Kim’s mapping out 2012, including holidays, and Kris isn’t a part of it. Any itineraries for the future don’t include Kris very much.”

Rumors of the couple’s marriage falling apart have been swirling ever since they said “I do” in a lavish ceremony in Santa Barbara, California just 2 short months ago on August 20th, which was filmed for a two-part TV special on E! called “Kim’s Fairytale Wedding: A Kardashian Event” that aired earlier this month.

But there may be hope for the newlyweds and their marriage, as an inside source tells Hollywood Life that the couple packed their stuff up because they have completed filming the next season of “Kourtney and Kim Take New York.”

“Kim and Kris finished filming the show and so they did move out of the hotel…together,” said the insider. “They are both heading to Kim’s birthday party in Vegas.”

There are also reports that the newlywed couple are headed to Vegas to celebrate Kim’s 31st birthday this weekend.