There’s a new bromance in town … and it’s between Kim and Kourtney Kardashian‘s respective beaus, Kris Humphries and Scott Disick!

The odd couple have been hanging out a lot in the Big Apple while filming the new season of “Kim & Kourtney Take New York.” During the famous New York fashion week, the pair were spotted having a blast in the front row at the Jill Stuart show.

Unlike some of the other Kardashian clan, Scott has apparently rubbed Kris the “right” way, as the NBA player has nothing but nice things to say about him.

“It’s cool because you see Scott, and I don’t know if hustler’s the right word, but he’s got his hand in everything. He’s non-stop and so it’s been cool. Scott’s a good dude,” Kris said when at the launch of the 2012 Lamborghini LP700-4 in NYC on Tuesday night.

So what do Humphries and Disick do when they get together? Kris explained, “We just more so hang out as guys. I think that I’ve been in the NBA seven going on eight years so it’s not like I just jumped into the fire from the snow. It’s been cool. Scott’s a good dude. I’m sure while we live together, the more I’ll get to know him.” 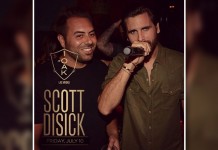 After Getting Dumped by Kourtney Kardashian, Scott Disick Asks Fans to “Come Party With Me in Vegas”