GOSSIPONTHIS.COM Celebs Will Smith and Jay-Z Spotted Hanging Out on the Set of “Men...
ShareTweet While filming on the set of the new “Men in Black 3” movie, Will Smith got a special visit from his good friend and business partner Jay-Z. The Hip-Hop titan, who has worked with Smith previously in the broadway production “Fela!” and also manages his daughter Willow Smith’s music career, was seen laughing and joking with the movie star as he filmed scenes in New York City’s Battery Park.

Will Smith recently announced that he is bringing Jay-Z along to help his production company Overbrook Entertainment develop and produce films. It’s also rumored that the pair will also work together on the upcoming revamped version of “Annie,” which will star Willow Smith in the title role.

One more pic of the Jigga man and the man who used to “Get Jiggy With It” below: 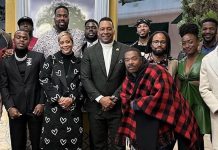