Denzel Washington has received an honorary degree from the University of Pennsylvania.

The Oscar-winning actor spoke in front of some 5,000 graduates at the Ivy League school Monday morning (May 16) as he accepted the award, admitting he felt out of his “comfort zone” at the commencement ceremony. “It’s a little overwhelming and out of my comfort zone,” he said. “I had to come exactly because I might make a fool of myself. I’ve found that nothing in life is worthwhile unless you take risks. Nothing. If you don’t fail, you’re not even trying.”

At the ceremony, Washington, whose son Malcolm is a student at UPenn, was praised for his “enlightening and inspiring” performances throughout his career. University President Amy Gutmann said: “His moving performances have entertained us, inspired us and often enlightened us.” 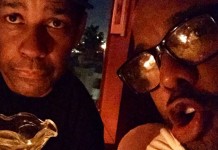 Is Lee Daniels Trying to Cast Denzel Washington on Empire?