GOSSIPONTHIS.COM Celebs Lady Gaga is a 3-Headed Monster on the Cover of V Magazine
ShareTweet Lady Gaga has snagged the cover of V Magazine and appears as a 3-headed “Mother Monster.”

In the June 2011 Asian issue of the publication, as well as a full interview and photos, the “Judas” singer pays homage to Japan with her fierce and quirky fashion. It is also reported that ten percent of the magazine’s profits will be donated to Japan to help Japan’s recovery after the deadly earthquake the country suffered back in March.

Speaking on her love for Japan, Gaga said:

“I have such beautiful memories of Japan and its people. And when the earthquake happened, I knew saying something just wasn’t enough. The little monsters have raised over $2 million purchasing these prayers bracelets I made myself. Let’s connect cultures from around the world and rebuild this beautiful country.”

Gaga also debuts her fashion editorial skills in the upcoming issue as V will feature her first ever magazine column. In it, she reveals the work that goes into the creative process of choosing her outlandish and fashion forward wardrobe.

Check out more shots of Gaga in the new issue of V Magazine below: 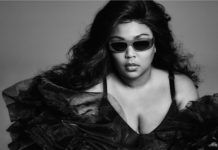