GOSSIPONTHIS.COM Pop Culture Bristol Palin Moving in with Kyle Massey and His Brother for New...
ShareTweet Just when you thought that your TV was going to be Bristol Palin free …. think again. The “Dancing with the Stars” alum will be back on screens very soon as A&E and Bio have given Sarah Palin’s oldest her own reality show.

According to new reports, A&E and the BIO Channel have ordered ten half-hour episodes of the currently untitled series, which will follow Bristol and her 2-year-old son Tripp as they move from Alaska to Los Angeles to live with Bristol’s friend, actor and fellow DWTS alum Kyle Massey and his older brother Chris (who is also an actor).

Speaking on the project with Us Weekly, Executive Vice President for Programming David McKillop explained, “Bristol is the kind of personality BIO is drawn to. Her personal life has been playing out in the media for several years but this will be the first time she’s opening up her real life, with her and son and her friends the Massey brothers.”

The reality show is due to premiere sometime later this year. 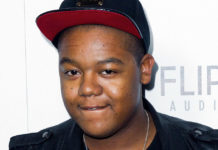 Kyle Massey Says He is NOT Dying of Cancer