GOSSIPONTHIS.COM Celebs Odd Future’s “Tyler the Creator” is Tired of Not Being Famous
ShareTweet Odd Future recently emerged from the Hip-Hop underground scene packing a whole lot of buzz. So much in fact, that on behalf of their labels, the likes of Jay-Z (Roc Nation), Steve Rifkind (SRC), and Sean “Diddy” Combs (Bad Boy) have all tried to ink deals with the outspoken band of musical misfits.

Despite the possibility of  being labeled a sellout, Odd Future frontman Tyler the Creator recently revealed he welcomes the thought of possibly going mainstream.

“I’m hungry for greatness,” Tyler said in an interview with the Drone. “I want to be great, I want to be an icon. I want when I die, I want people to cry — I’m hungry for VMA’s and Grammy’s, that’s what I’m hungry for. You know? F*ck this underground bullsh*t…Greatness is a different definition to different people…Greatness if the f*cking song that I wrote last week, somebody might not find that great but it’s great to me. And that’s all that matters, what the f*ck I think in my head — Greatness to me is finally getting my video played on MTV. It’s on there now and I’m f*cking, I’m happy. I finally got my sh*t on f*cking MTV and some people may think that’s selling out or whatever but I don’t really give a f*ck. That’s f*cking great to me. I’m proud of myself. I’ve been wanting that since I was seven years old and I finally got that sh*t. Hard works pays the f*ck off.”

What a vocabulary on this one!

What he lacks in humility he sure as hell makes up for with sheer passion.  Maybe a little TOO much passion!

Check out more from his interview below: 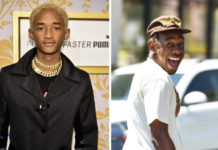